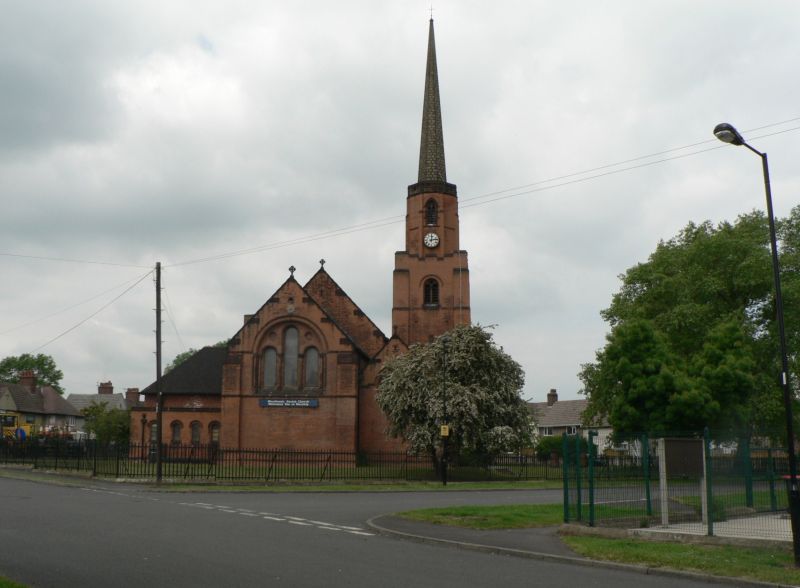 Interior: arcades have octagonal and cylindrical piers and 3-order round
arches in brick with continuous pelleted hoodmoulds. Chancel arch has shafts
in the jambs; large round arch into organ chamber, 2 smaller arches into
north chapel on cylindrical pier with carved capital. Fittings; no pews;
traceried roof screen with crucifixion. Plaque on south-west pier of nave
records Charles Thellussun's gift of the church to the parish upon its
consecration in 1913.

The church forms a focal point of the Woodlands colliery village laid out and
designed by Percy B, Houfton of Chesterfield for the Brodsworth Colliery
Company during 1907-1908. Houfton had previously designed colliery estates
at Creswell and Bolsover in Derbyshire and with the sinking of the Brodsworth
Colliery in 1907 was commissioned to lay out housing along the enlightened
lines of the newly emerging Garden Cities movement. Houfton applied the Arts
and Crafts style to the estate houses which were built in 2 phases; the style
borrows from that of C. F. A, Voysey who, in 1904/5, had designed some
colliery housing at Whitwood, nr. Castleford, Leeds (Davey, plate 87). Phase
one of Woodlands took place around a parkland site and its irregular low
density plan retaining mature trees has most appeal although most of its
housing has undergone alteration (see items listed under 'The Park'). Rapid
expansion of the colliery necessitated that the 2nd, much larger, phase be
hurried (to the dissatisfaction of Houfton himself) and the resultant scheme
is one of greater density around a horseshoe crescent with central and
radiating avenues. Several blocks of little-altered housing survive to
illustrate the nature of the original scheme (see under Central Avenue, Great
North Road, Green Lane, Harold Avenue, Quarry Lane, The Crescent and West
Avenue). Primary and Secondary schools and the present Health Centre are the
most notable public buildings erected on the estate (see under Central
Avenue, Chadwick Road and The Park). The estate received critical acclaim at
the time and its importance has been outlined more recently by Martin Gaskell
(1979).