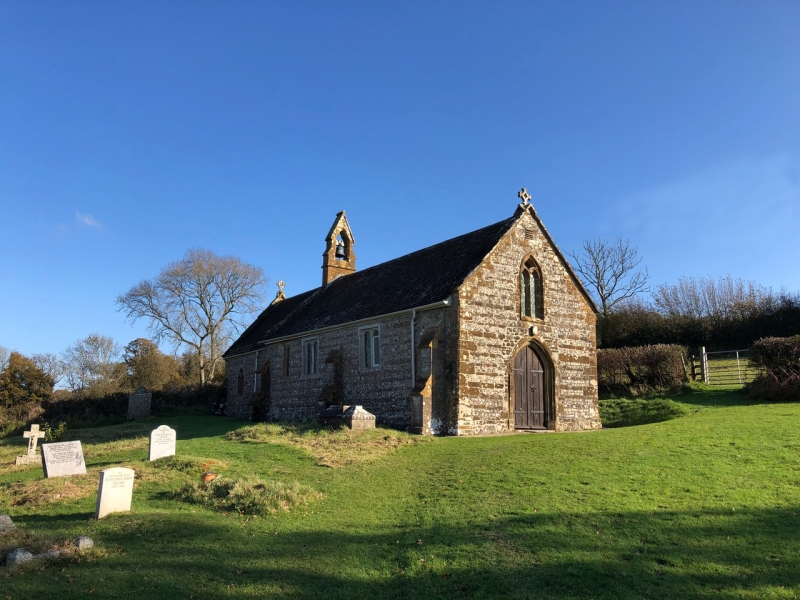 MATERIALS: constructed of Forest Marble stone rubble and flint with Hamstone ashlar dressings, arranged in polychromic bands to the north elevation of the nave. The roofs are tiled with lower courses of stone slates to the chancel roof. The gable ends have stone copings bearing cross finials and there is an ashlar bell-cote between the nave and chancel.

PLAN: it is orientated south-west to north-east and is a two-cell structure comprising a nave and a chancel; the latter added in 1848.

EXTERIOR: there are angled buttresses to the chancel and its windows are probably Cl9. The east window has three trefoiled lights under a centred head; the label has carved head stops of a similar style to some at Sherborne Abbey. The windows to the north and south elevations have two trefoiled lights with quatrefoils. The north door has a chamfered, two-centred head and continuous jambs. There are three buttresses to the north wall of the nave and a C19 window and two C16 or C17 windows of two segmental-headed lights set in square heads to its north elevation; two similar two-light windows in the south wall. The early-C14 west window has two pointed lights in a two-centred head. The west doorway has two-centred mouldings with continuous jambs and is C19; there is a pair of doors with decorative strap hinges.

INTERIOR: a simple interior with painted walls and probable C19 collar-braced roofs with moulded wall plates; the angel corbels have been reset in nave. The narrow benches have elaborate carved ends depicting scenes from the Life of Christ and other religious figures and scenes; the one closest to the pulpit was altered in 1848. There is C16 or C17 linenfold panelling behind the altar and by the west door. The pulpit is probably C19 but incorporates some possible late-medieval panels, and the font is also probably C19 and has an octagonal stone bowl on cluster of four shafts with moulded capitals and bases. At the western end of the nave's north wall is a fragment of a C17 wall painting of the Lord's Prayer in black script, discovered in 1961. Memorial plaques in the nave commemorate those men from Hilfield St Nicholas who died during the First and Second World Wars. The chancel arch is two-centred, with two chamfered orders, the outer one continuous with the jambs and the inner order dying into the responds. The Communion rail has been placed at the entrance to the chancel which has C19 encaustic floor tiles and there are poppy-headed stalls. The bell is dated 1726, and the registers date from 1565.

The Church of St Nicholas is situated in an isolated rural location; in the C19 Hilfield was described as a widely-scattered village. It has medieval origins and dates probably from the late C13 or early C14; a chapel at Hilfield is first mentioned in 1310 and was a chapel under Sydling St Nicholas to the south-west. In 1848, at the request of the parishioners, it was separated from Sydling and this, as well as its poor state of repair, was the catalyst for major restoration, including an addition to the east end. The mid-C19 rebuilding included much of the walling, repairs to the floors, new roofs and seating, and was carried out by the architect Robert Jewell Withers (1823-94). The church underwent further restoration in 1950 when the benches were remade, although the original carved bench ends were retained. These are carved with religious scenes and figures of no accepted style, leading some sources to suggest that the seats were brought to St Nicholas' Church from Cerne Abbas Abbey following the Dissolution; others have suggested that based on the carvings they are either C17 or C18 or are antiquarian efforts of the early C19.

In 2007 the church became a chapel of ease to St. Andrew's Church, Yetminster.

The Church of St Nicholas which has C13 or C14 origins and was restored in the mid-C19 is listed at Grade II* for the following principal reasons:
* Quality of detail: it has a simple plan and form, but the detailing is well-executed in terms of the treatment and use of materials;
* Interior: it retains its historic fixtures and fittings including bench seats, encaustic tiles, stone font and a pulpit which incorporates some possible medieval panels;
* Fittings: although refurbished in the mid-C20, the benches with their highly-decorative ends a remarkable survival; the poppy-headed stalls are particularly ornate.