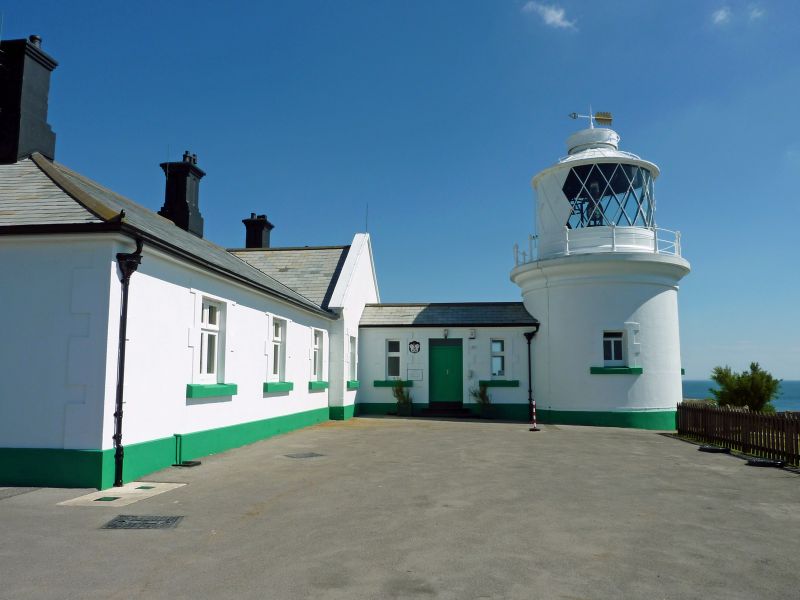 2.
Built 1881 by Trinity House. A good group, largely unaltered, consisting of the
lighthouse itself, a residential block, and stores, all enclosed by a Purbeck Stone
wall, the outer face of which is whitewashed. All other structures have rendered walls
and slate roofs. The main residential block is a single-storey building in a slightly
"Tudor" style, reminiscent of contemporary almshouse blocks. It consists of a house
at each end, for permanent staff, and quarters for a relief keeper in the centre. The
main roof is hipped, with a cross-gable in the centre, Four rendered chimney stacks,
with oversailing courses. Windows, with raised cement surrounds imitating projecting
quoins have timber mullions and transoms. At the north end of the compound is a range
of sheds, similar in style to the main block. One is now used as a garage, another
as the engine house for the light, and others as stores. Rendered walls and gabled
slate roofs. The lighthouse is south of the residential block, joined to it by a narrow
single-storey link building. The lighthouse is circular in plan, with one stage below
the light istelf. This lower stage has 4 windows similar to those in the residential
block. Below the light is a gallery, supported on a continuous moulded stone course.
The gallery has cast iron railings with ornamental standards. The light itself has
diagonal glazing bars and a sloping metal roof, finished with a circular drum carrying
a weather vane. South of the lighthouse, with the compound, is a modern Coastguard's
Lookout (not listable). Square stone piers and wood gates to the compound entrance.