A Grade I Listed Building in Norham, Northumberland 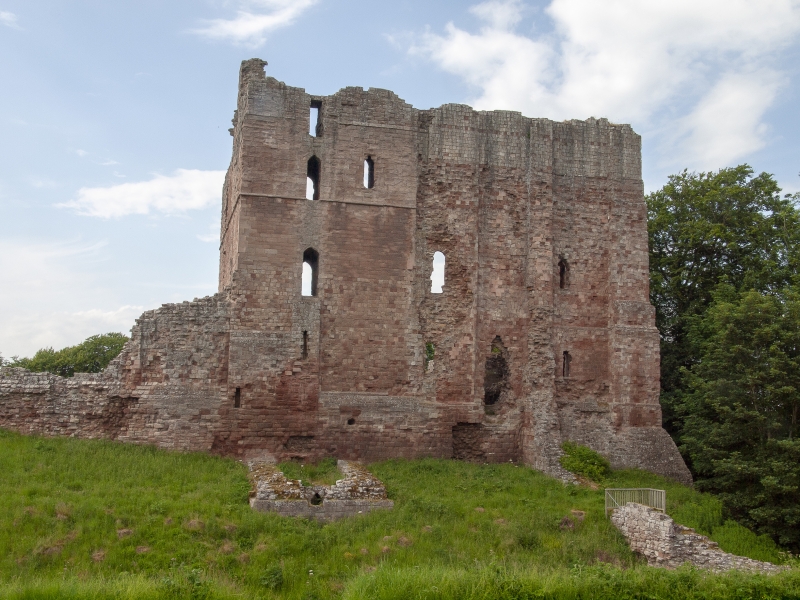 Ruined castle of the bishops of Durham. Originally a motte-and-bailey castle
of 1121 for Bishop Flambard. Rebuilt in stone c.1157 by Richard of Wolviston
for Bishop Puiset. Of this period the keep and part of the masonry of walls
and west gateway. C13 additions include the south wall of the outer ward and
the great hall in the inner ward. The keep was extensively remodelled in
1422-25; finally much rebuilding, especially of the north wall, in 1513-15
for Bishop Ruthal. One of the turrets of south wall encased in Gothick
cottage in the late C18 or early C19.

Outer ward: large and quadrant-shaped on dramatic sloping site. West Gate
in left-hand corner extensively altered C15 and C16 but the remains of the
tunnel vault are C12. The barbican was added in the C15 and in front of it
a stone causeway with a gap in the middle for a centrally-pivoted drawbridge.
North wall has 3 casemates with cannon portholes. The south wall sub-structure
only remains with parts of 13 or 14 arches which formed the base of the wall
and were formerly buried in an embankment; also the lower courses of the Sheep
Gate and'3 turrets. A 4th turret to the right of the sheep gate is covered
by the Gothick cottage. The east wall is largely C12 but with a C16 turret.

Inner ward: of the gatehouse, great hall, great chamber and kitchen only the
lower parts of the wall remain. They are against the north, east and west
curtain walls. The keep is the most dramatic part of the castle. It is 84 x
60 ft. and c.90 ft. high. Most of the north wall has gone but the rest stands
to full height. On the ground floor 3 tunnel-vaulted chambers, the vaults
divided into bays by broad transverse ribs rising from flat pilasters; the
bays lightly groined. On the first floor a very large round-arched recess.
The west wall is largely a C15 rebuild and has a stone newel stair. Many C12,
C13 and C15 window openings. Attached to south wall, lower courses of
garderobe tower.