A Grade I Listed Building in Much Marcle, County of Herefordshire 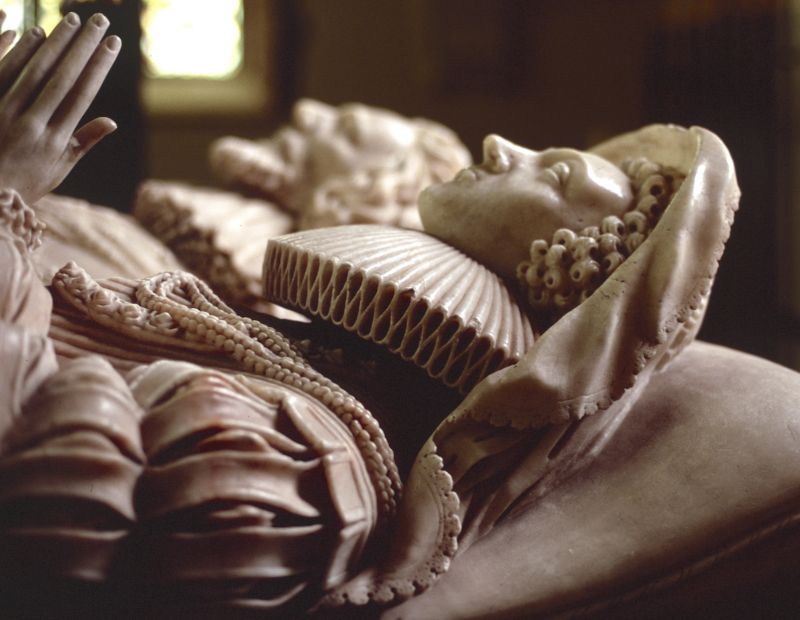 Church of England Parish: Much Marcle with Yatton

Find accommodation in
Much Marcle

Nave:
4-light C15 west window with transom in 2-centred head with label and stops;
C13 west doorway in 2-centred double chamfered arch; small lancet to west end
of south aisle and small square-headed light to north aisle; four lancets to
each side of clerestory; three C14 north aisle windows have two lights with
cinquefoil heads under 2-centred arches; C15 east window of south side of
south aisle has three trefoil-headed lights under a 2-centred head with label,
restored 3-light window with intersecting tracery to east of south porch and
to its west a 2-light cinquefoiled window like those in north aisle. Tower
is late C15 of dressed sandstone in three stages with crenellated parapet,
two waterspouts to north and south faces, angle buttresses to east corners,
bell-chamber with 2-light openings and trefoiled heads to each face; small
trefoiled light to second stage, one to each face; first stage has
trefoil-headed light to north and south each under label with Tudor arch profile;
ground floor has cambered moulded label over two cinquefoil-headed lights.
Late C19 vestry has central rear stack, two trefoiled lights and a shouldered
entrance. North chapel has heavily restored north wall with central buttress
and a restored cinquefoiled 2-light window to the west; its east window and
general massing forms a pair with those of the chancel when viewed from the
east: two late C13 matching 3-light windows with 2-centred arches and labels
separated by a central buttress and each flanked by an outer buttress; both
chancel and north chapel roofs have a stone cross at their east apices.
The south wall of the chancel has a large C15 window with three trefoil-headed
lights and to the left a 2-light late C13 or early C14 trefoiled window over
an early C18 priests' door with a segmental pediment, moulded architrave and
scrolled brackets. South porch has one early C14 trefoiled ogee-headed opening
in the west and east walls, a moulded entrance arch and angle buttresses; the
roof trusses are late C19. The south door is set in a 2-centred arch with
fillet mouldings.

INTERIOR: C19 nave and chancel roofs, respectively
crown-post and wagon. Chancel arch and west tower arch are 2-centred with two
moulded orders and concave chamfers. The chancel has c1700 communion rails
with turned balusters; the exquisite mid-C14 altar tomb and effigy of Blanche
Mortimer, wife of Sir Peter Grandison has canted chest and coved canopy with
drapery spilling over the cinquefoiled panels of the chest. North chapel is
separated from chancel by a cylindrical column and iron railings and curtains.
Two chest tombs with effigies: one c1400 and the other for Sir John Kyrle died
1650 and several marble C19 wall monuments. Stained glass by C E Kempe in
chancel and north chapel, c1877-89. Nave has C13 circular piers and chamfered
arches; the capitals are richly carved, some with foliage and heads. In the
south wall of the south aisle is a C13 piscina with three pointed arches and a
square drain. Font is C13 with tapering bowl surrounded by three raised bands
as if derived from a wooden, band-reinforced tub font. In north arcade C14 oak
effigy of bearded man.