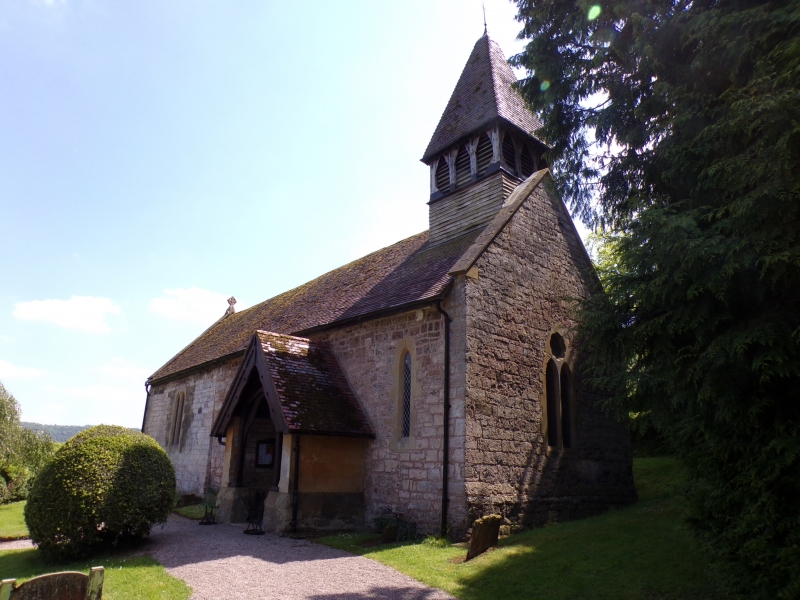 Church of England Parish: The Shelsleys

Find accommodation in
Clifton upon Teme

GV
I
Parish church. C12, altered C13 and restored 1859 by G Truefitt; repaired 1980. Tufa blocks, some coursed and some coursed and squared, freestone dressings; plain-tiled roof and timber bell turret. Consists of nave and chancel only, with C19 additions of bell turret and south porch.

C12 nave of three bays with two tall round-headed windows and one thin lancet window (restored) to the north side and a paired and single lancet (restored) on the south side with a small round-headed window high up in the centre; two-light plate tracery, C19 west window. Square timber bell turret (1859) with pyramidal roof and three cusped louvred windows to each side. C19 north porch of ashlar with a steep gabled roof; cusped timber outer archway. C12 north door with single order of columns with scalloped capitals, plain tympanum and deep zig-zag enrichment to the arch. Chancel is mostly C13 with north wall rebuilt in C16; single paired lancet window on north side, paired and single lancet on south side and three-light stepped lancet east window, all mid-C19 but with some original stonework to the inner parts.

INTERIOR: fine tie- and collar-beam roof of six main trusses and intermediate tie-beam rafter trusses with ashlar posts, the three easternmost trusses have raking and straight struts which have foiled and serrated inner braces forming geometrical patterns, thought to be late C14-early C15 but possibly later and restored. The chancel is ceiled with boards which are painted blue and enriched with gold stars. Moulded roof beam with double row of vine leaf ornament; C20 cross.

Excellent late C15 rood screen with linenfold lower panels open and traceried upper panels and upper rails enriched with vine leaf and cresting; at the south east the screen continues, simplified in detail, to enclose a former chapel. Tall, cylindrical C12 font with moulded base. Trefoil-headed piscina, the cill of which is undercut with dogtooth. Chancel floor has C15 tiles in various floral and geometric designs.