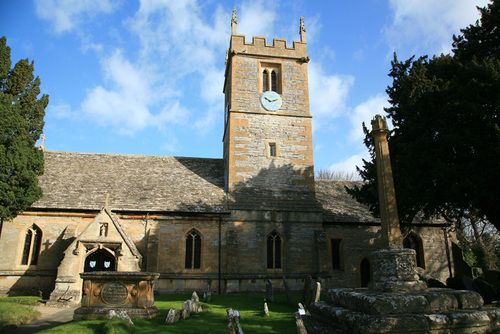 EXTERIOR: The church is mainly in Perpendicular style. The nave has three 2-light south windows with Y-tracery under triangular heads. The south porch, which has a stone-slab roof, has pierced spandrels to the triangular-headed entrance, under a straight-headed label with big grotesque stops. The Tudor-headed nave south doorway has foliage spandrels and square label. On the north side the nave has 2 windows similar to the south side, and a doorway with continuous chamfer. C12 masonry incorporating chevron friezes is built into the walls. The tower rises 2 stages above the nave, with polygonal north-east turret, freestone battlements and pinnacles. It has a single small south window in the lower stage, and 2-light belfry openings under straight heads. A war memorial clock face is on the south side. The chancel has diagonal buttresses, and a rebuilt limestone east wall with 3-light window. In the south wall is a straight-headed window to the left, priest's doorway and 2-light window to the right. The north chapel has a 2-light east window, re-set from the north wall of the chancel and similar to the nave windows. The transept has a 2-light north window and west doorway.

INTERIOR: The porch has a pointed tunnel vault on transverse arches. The arched-brace nave roof is 3 bays. Tower arches have continuous hollow chamfers and beneath the tower is a rib vault. The chancel has a 2½-bay arched-brace roof on corbels, with 2 tiers of windbraces. In the south wall is a pointed c1300 piscina. The embrasure of the east window has traces of stencilled foliage. Walls are otherwise whitened rubble stone and incorporate some C12 masonry with chevron friezes. Parquet floors, and mosaic sanctuary floor, are early C20.

PRINCIPAL FIXTURES: The plain round tapering tub font is C12. Benches have moulded edges, probably contemporary with the choir stalls, which have plain moulded ends and open tracery to frontals. The rich Jacobean-style pulpit is by John Clackson of Worcester, of 1893. The simple panelled sanctuary dado incorporates brattishing behind the altar. A memorial tablet to Benjamin Scarlett (d 1739) has entablature and achievement, and is by Richard Squire. Glass by Ward and Hughes includes scenes from the life of Christ in the east window (1859) and tower (c1873), and angels in the north vestry (c1858). The west window of SS Peter, Andrew and Paul, is by Burlison & Grylls (1891), with other windows by Hardman (1902, 1982), William Pearce (1899) and Ray Bradley (1988). A fine late C20 window by Nicola Hopwood shows a vine growing from a will, symbolising the fruits of a benefaction by John Martin, detailed on an associated board of 1747 under the tower, and whose tomb is in the churchyard.

HISTORY: A church of C12 origin, of which the font and masonry fragments built into the nave walls survive from this date. The nave and central tower are C15 but they possibly reflect a C12 plan. The chancel was remodelled c1300 under Abbot John de Brokehampton of Evesham. The east wall was re-faced in 1900. The church was restored in 1903-4 by C.F. Whitcombe, who also added the north transept and vestry with organ chamber.

REASONS FOR DESIGNATION: The church of St Andrew, Hampton, is listed at Grade II* for the following principal reasons:
* It is a well-preserved aisleless Perpendicular church retaining Norman fragments.
* Tower base and porch retain C15 vaulting.