Church of All Saints, Churchyard Wall, Railings and Gate 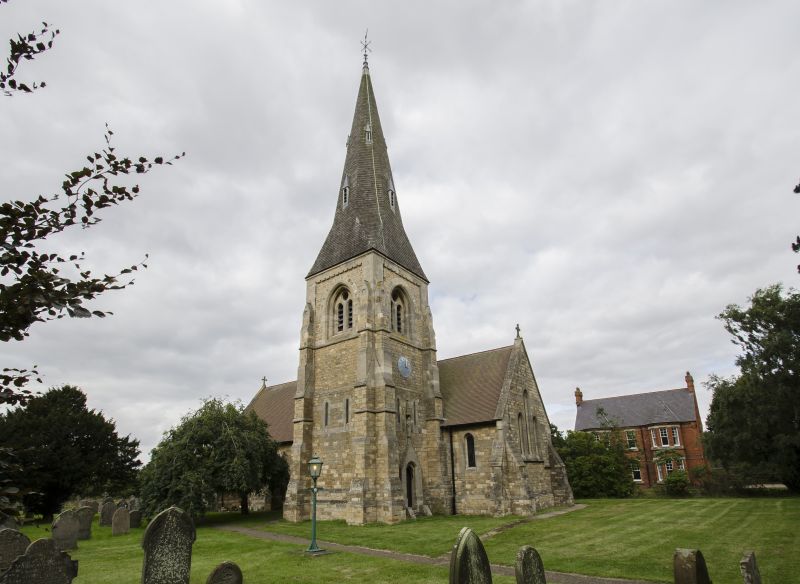 PLAN: the church consists of an aisleless nave, chancel, north vestry and a three-stage tower to the south, opposite the vestry.

EXTERIOR: there are gabled roofs to the nave, chancel, vestry and south porch. The latter has a double chamfered and rebated arch with engaged shaft responds and moulded capitals and bases. The two-bay nave has three, two-light triple lancet windows with a central plate tracery motif on the south elevation and four on the north, each separated by stepped side buttresses. The west window has a plate-tracery window consisting of three inverted, stepped lancets and a five-cusped roundel, all recessed. Above is a plain gable parapet and a Latin apex cross of similar design. The north vestry is a plain, unbuttressed, square structure with a gabled roof. An external, mid-C12, round-headed door to the east is re-used from the old church; the vestry has a double shaft chimney and plate tracery to the gable roundel of six lights. The one-bay chancel, lower than the nave, has a single, triple-lancet window with plate tracery motif on the outer lights to each elevation. At the east end, triple-lancet windows in chamfered stone surrounds have stained glass (see below); above is a coped, gable parapet with a Latin cross at the apex. The south tower has three stages, each with clasping buttresses with three set-offs, and a gabled recess to the east containing a memorial to Eleanor of Castile under a crocketed canopy carved by Thomas Earp of Lambeth in 1876. At the first stage, there is a pair of single lancets with double-lancet bell openings and a billet-moulded corbel table above. The octagonal, shingled, splay-footed, broach spire has two tiers of canopied lucarnes topped with a weathervane and is supported by angled buttresses.

INTERIOR: the south porch roof has a coupled-rafter structure; the inner doorway has a double-leaf timber door on large bifurcating iron hinges. The nave walls are unplastered, coursed ashlar and the floors of both nave and chancel are laid with Godwin's encaustic tiles. In the chancel floor, a plaque reads: 'Here/died Eleanor of Castile/Queen of England/Nov. 27th 1290'. The four-bay nave roof comprises coupled rafters and scissor braces to each truss, dropping to plain, stone corbels. Three steps lead to the chancel beneath the double-chamfered chancel arch which has engaged semi-circular responds with moulded capitals and bases. Against the north respond is the hexagonal, Caen stone pulpit base, corbelled and moulded, on which are decorative brass railings supporting an eagle lectern of 1877. The scissor-braced, chancel roof is boarded with exposed, moulded ashlar posts. A plain sedilia is set in the chancel south wall. The ten-stop manual organ (converted to electricity in the mid-C20) has exposed pipes decorated by Heaton, Butler and Bayne, and fills the chamfered archway into the vestry. Within the vestry are fitted cupboards and a plain fireplace.

The pitch-pine nave pews are of the simplest form and the more elaborate chancel pews are of oak. Under the chancel east window is a glass mosaic reredos of 1877 by James Powell and Sons of Whitefriars depicting the four gospels in roundels. The east windows by Heaton, Butler & Bayne depict the life of Christ. The lancet on the north elevation has Holman Hunt's 'Light of the World' and the south lancet has the Good Shepherd. The late-C15, octagonal font from the old church has been relocated inside; it has traceried panels on the stem and shields in quatrefoil panels on the bowl. The five bells in the tower were cast by Taylor's of Loughborough in 1877.

There had been a church in the parish of Harby since the late C13 which was endowed with a chantry chapel by Edward I in 1294, following the death of Queen Eleanor. However, the chapel was dissolved at the Reformation and the church became a chapel of ease to North Clifton, the building evolving into a plain rectangular box. It was in a poor state of repair by the middle of the C19 and a fund was launched in 1868 to provide a new building just to the north of the existing structure. John Thomas Lee of London was appointed as the architect and construction began in 1874, with consecration on 2 August 1877. The old church was then demolished and some parts re-used in the new building. In 1963, the shingles on the spire were replaced with Canadian cedar. In January 2010 work began on renovating the roofs, incorporating insulation, a breathable membrane and all new tiles.

Harby is famous for one event, the death here of Queen Eleanor of Castile on 28 November 1290 in the manor house of Richard de Weston, which was sited adjacent to the church. Her health had been failing for some weeks and at the last she was attended by Edward I, the parish priest William de Kelm, and Oliver Sutton, Bishop of Lincoln. The ensuing progress of her body to Westminster Abbey resulted in the famous and architecturally important Eleanor Crosses at the points where her cortège rested each night, three of which still stand.

The Church of All Saints, Harby is designated at Grade II for the following principal reasons:
* Architectural Interest; it is a good example of a church built in the Early English style by J.T. Lee, an architect who restored other listed churches;
* Intactness: the building remains largely intact;
* Interiors: the glass mosaic reredos of 1877 by James Powell and Sons, good quality stained glass and the C15 font from the former church add interest;
* Group Value: the church lies immediately to the east of the scheduled moated site of the manor of Richard de Weston, where Queen Eleanor of Castile died in 1290.