A Grade I Listed Building in Letton, County of Herefordshire 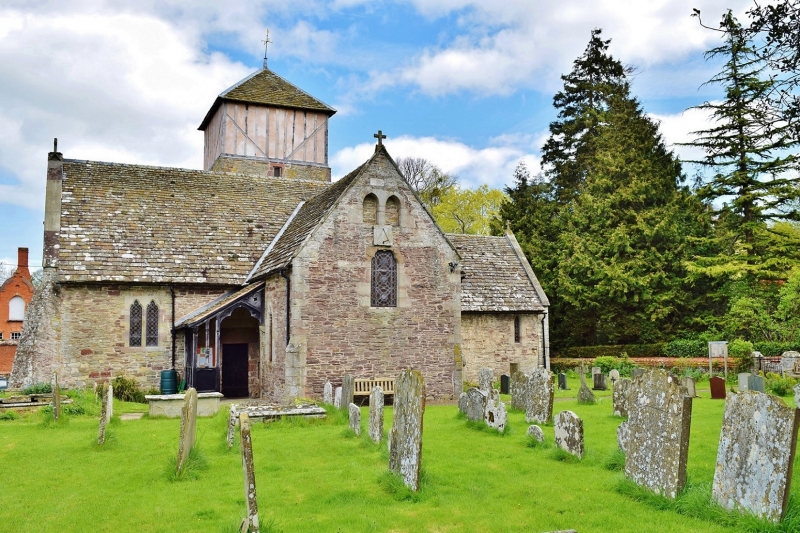 GV
I
Parish church. C12, C13 and C14, with restorations of 1883. Sandstone rubble, tufa sandstone dressings and Welsh slate. Timber-framing with plaster infill to tower. Stone slate roofs. Cruciform plan with two-bay nave and two to three-bay chancel to either side of north tower and south transept. South porch.

Tower has three stone stages and timber-framed fourth stage. Pyramidical roof with weathercock. Short weathered diagonal buttresses to north-west and north-east corners. West elevation has central vent loop to second stage and chamfered square-headed opening to penultimate stage. Timber-framed top part has thin vertical studs and a pair of angle struts rising from cill to corner posts. East and north elevations are similar to west elevation save for a trefoil-headed opening to ground stage of each, that to north elevation being to left of centre. North elevation of nave has tufa string mid-way up the wall. Large sharply tapered buttress with tumbled coursing to left of centre. Weathered diagonal buttress to right corner. Verge with gable cross.

North elevation of chancel has a central two-light traceried window under a square head. Each light is trefoiled and ogee-headed. To the left is a chamfered lancet. East elevation has three-light window with stepped uncusped lights. Restored verge and gable cross.

East end of nave, above chancel, has vertically hung slates, some Welsh and others perhaps Westmorland slates. South elevation of chancel has lancet to right-hand side, a recessed triangular headed one-light window to left of centre and a priest's door with chamfered two-centred head and C19 ledged oak door to the left-hand side. South elevation of south transept has central quatrefoil-headed light beneath sundial and two blind pointed recesses. Diagonal buttresses to corner. Verge and gable cross. Right-hand return has a pair of trefoil-headed lights. Left-hand return has one trefoil-headed light and half of a large restored arch within which is a recessed blocked squint-like opening and a triangular-headed doorway with two orders of roll mouldings and a nail- studded oak ledged door with, perhaps, C17, scutcheon-plate, strap hinges and handle. South elevation of nave has a pair of restored trefoil-headed lights. Large buttress with tumbled coursing to left corner. Lean-to early C20 oak porch covers entry into south wall next to junction with south transept. Entry has red sandstone C12 lintel with geometric pattern to centre and two zig-zags to each end. Jambs are mostly of tufa and continue the zig-zag to round super-arch where the motif changes to semi-circles. Label with nailhead design.
Ledged oak door with rich asymmetrical scrolls, perhaps C12, from strap hinges. West elevation of nave has a pair of trefoil-headed lights with tufa jambs. Beneath is the west doorway which has a round tufa arch beneath which is a mid-C20 lintel. Ledged door, probably also mid-C20.

INTERIOR has open waggon roofs, much restored. That of chancel is lower than that of nave. The latter has corbel table supporting wall-plate as it crosses the south wall of the tower. South transept roof is probably C19 . Chancel has tufa in walls and a recess with a two-centred head at the east end of the south wall. Further west is a similar but larger recess, a C13 piscina, with a projecting circular drain. North wall has segmentally headed tomb recess with pendant and trefoiled cusps. C17 oak communion table with carved rails and bulbous legs. C17 choir stalls comprising five benches and two seats, having turned legs, carved arms and rectangular back panels with moulded margins.

On north wall, monument for John Freeman, died 1816, in the form of austere rectangle in black and white marble with a small apron enriched with acanthus. East window has stained glass with geometrical patterns for Elizabeth Blisset, died 1867, which was restored in 1981. South-west and north-west windows have similar designs and are for
Mary Blisset, died 1882 and Charles Blisset, died 1859. Brass plaques on south wall are for Edward Chamberlain, died 1712; Joane Parker, died 1697; the Revd Rowland Parry, died 1761; his wife Elizabeth, died 1736; and son Harry, died 1722. On north wall is a C17 to C18 reader's desk with canted front, swags, under-cut carving and scrolled end. Seat has plain back similar to those of choir stalls and is linked to desk by rail at arm-level beneath which are turned balusters alternating with enriched splat balusters. Nearby, in contrast is a late C20 Wurlitzer Digital Music System.
Nave has plain two-centred tower arch to the right of which is a triangular-headed niche.

Font is C13. Octagonal bowl with chamfered underside, octagonal stem and round base. Pulpit is early C18, part octagonal with swags and ribbons, acanthus frieze. Back panel supporting tester has carved front. Tester is also enriched with carved front and has pilasters to angles. C20 steps have three turned balusters, probably C18, to handrail. Oak lectern in memory of the Great War. Near the tower arch is a grey and white marble wall monument for John Blisset, died 1822, consisting of a draped sarcophagus surmounted by a broken tree.

South transept has fluted chamfer stops at north-west corner at junction with nave. Piscina in east wall is C14. Ogeed head with inner arch also ogeed and ballflowers between the two. Circular drain. On the same wall a contemporary recess with two-centred arch and two rows of ball-flowers. Two mutilated tomb recesses in south wall. Late C19 stained glass for the Blissets and Margaret Dew. Tower has several C18 floor slabs and, in the east window cill, fragments of a C13 foliated coffin lid. Cast-iron chest with two fielded panels to the lid and front and pivoted handles to ends and lid. Raised inscription on lid: REGISTER/CHEST/1813/ COALBROOKDALE