A Grade I Listed Building in Bretforton, Worcestershire 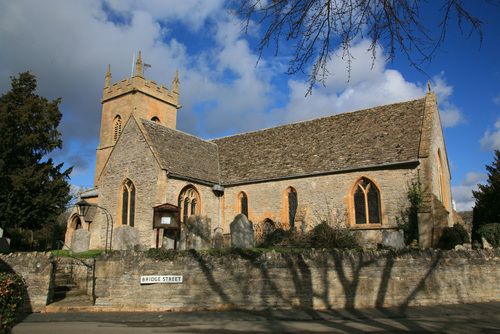 Parish church. Late C12, partly rebuilt late C13 (consecrated 1295), extended
mid-C14 and C15, restored mid-C19. Coursed lias rubble with ashlar dressing
and Cotswold stone roof. West tower, nave with north and south aisles and
porches, transepts and chancel. West tower: C15. Three stages with
diagonal step buttresses and crenellated parapet with crocketted corner
pinnacles. Belfry stage has windows of two ogee trefoiled lights under a
2-centred head, the first stage has a small square-headed window, and the
ground stage has an ogee trefoiled window with square head over a door with
a C19 Tudor arch. Aisles: C12 with later details. South aisle: three bays,
that to right occupied by gabled C14 transept which has diagonal buttresses
and a C14 window of two cinquefoiled lights under a 2-centred head. Aisle
to left has a C19 stone porch with a C15 door to the outer arch, to the
right a window of three cinquefoiled lights under a triangular head. North
aisle and transept similarly arranged, save that the transept has a window
of two ogee trefoil lights under a 2-centred head. Chancel: late C13 of
three bays with two trefoiled lancets to west and a window of two cinque-
foiled lights to east. East window C18 of three pointed lights under a
2-centred head. Interior: nave: late C12 arcades, that to south of 2½ bays
with 2-centred arches of two square orders. The pillars and responds are
round with scalloped capitals. The north arcade probably slightly later
in date is of three bays. The arches are 2-centred and the pillars round.
The capital of the first pillar from the east has a carving of the legend
of St Margaret on the nave (south) side. A blocked C15 doorway to tower
has a hollow chamfer to arch and jambs. South aisle has a C14 trefoiled
piscina with shaft in the south wall. Part of the rood loft staircase
survives at the north-east corner. Chancel: the windows are widely splayed
with chamfered rere arches. Roofs: nave and chancel roofed continuously
without chancel arch, nave of three bays, chancel of two, with heavily
moulded tie-beams and wall-plates. The tie-beam at the junction has arch
braces, rising from C15 stone corbels. Aisle roofs are lean-to. Fittings:
re-set panelling in south transept includes a piece dated 1615. The font
is round with a tapering bowl and may be C12. (VCH, 2, pp 364-366; BoE,
pp 99-100).