A Grade II* Listed Building in Ford and Stoke Prior, County of Herefordshire 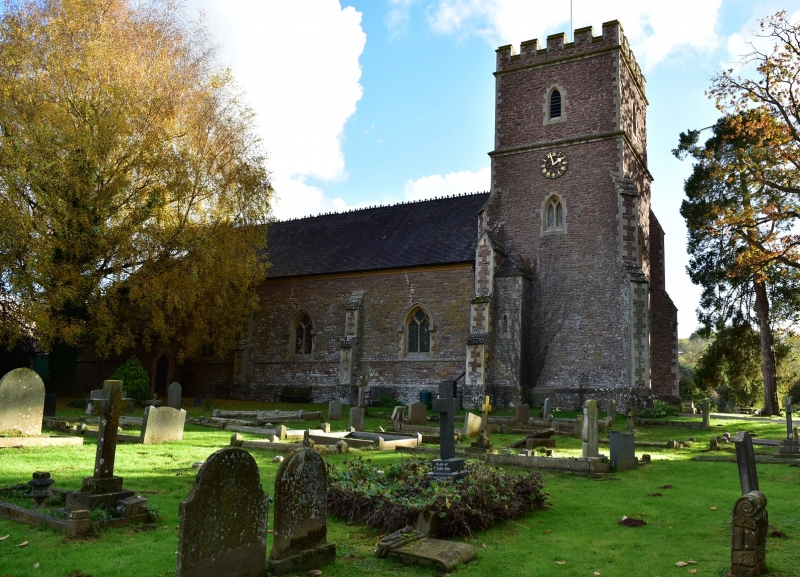 Location: Ford and Stoke Prior, County of Herefordshire, HR6

Civil Parish: Ford and Stoke Prior

Church of England Parish: Stoke Prior and Ford

Find accommodation in
Stoke Prior

Parish church. Probably C14. Rebuilt 1863 by George Colley of London.
Sandstone rubble with ashlar dressings, machine-tiled roof with decorative
ridge tiles and gable-end parapets with cross finials. West tower, three-
bay nave with north vestry and two-bay chancel. Decorated style. West tower:
three stages with strings and diagonal corner buttresses with offsets. Lower
stage forms west porch, and has a pointed west doorway of four chamfered orders
and a hoodmould with foliated stops. There is a 2-light window in the south
elevation. The second stage has a 2-light window in each elevation (except
the east); the west window has a hoodmould with block stops, and there is a
clockface to the west elevation. The belfry stage has pointed louvred bell
chamber openings and above is an embattled parapet. The tower stairs are
situated in an angled projection at the north-east corner. Nave: there is a
chamfered plinth band, a moulded sill string and a hollow chamfered eaves
cornice. At each end of both elevations are large gabled buttresses with off-
sets and there are also buttresses with offsets at the bay divisions. Windows
are all of two lights and have hoodmoulds with block stops. The north vestry
at the junction with the chancel, is gabled and has a lancet window with a
sill string at its north end. There is a pointed doorway of two chamfered
orders in the west side. Chancel: the lower parts of the walls probably retain
some earlier masonry. The east gable end has an offset at sill level and a
4-light window with a hoodmould and head stops. There are two lancets in
the south elevation and one lancet in the north elevation. An opening with a
four-centred head to the north-west of the chancel has been blocked. Interior:
the chancel arch is of two chamfered orders, the inner one supported on short
colonnettes on corbels, and the tower arch is of three chamfered orders. The
nave has five arch-braced moulded intermediate collar and tie-beam trusses with
arch-braces struts and a V-strut above the collar with a pendant finial at its
base. The east window has a hoodmould and nookshafts with foliated capitals.
In the nave is a C14 octagonal stone font with moulded underside, a large
octagonal C19 stone pulpit, a circa 1700 parish chest and a medieval stoup.
Memorials: loose in the nave is a tablet to Cecilia Watson, died 1705-6, and
also one to William Watson of 1688-9. In the tower are two late C18 memorials,
one with an urn relief, a memorial to William Cook, died 1766, a memorial to
Sarah Wyatt Watling, died 1830, and also an illegible sarcophagus relief.
(RCHM, Herefs, II, p 187-8, item 2; BoE, p 293).