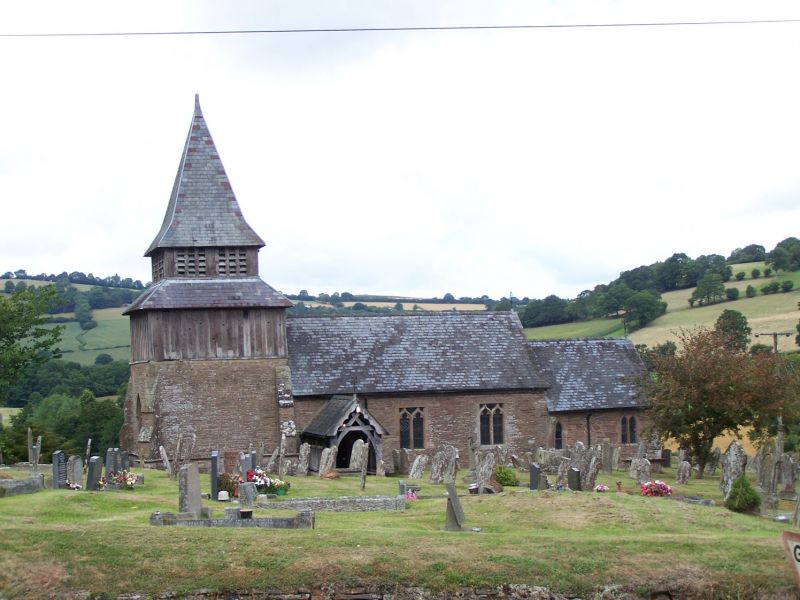 Parish church. Early C13 nave and north aisle; c1300 chancel; early C16
west tower. The church was extensively restored in 1860 by T Nicholson
which included the addition of the polygonal vestry; church further restored
in 1907. Sandstone rubble with dressed rubble later refacing, ashlar dress-
ings, part timber-framed west tower with timber cladding; Welsh slate roofs.
West tower; two stages with lower stage cased in stone during period of
restoration; truncated pyramidal roof surmounted by louvred bell stage and
short spire. Nave: two square headed windows with two trefoil ogee headed
lights (probably of C19 restoration) to right of gabled C19 timber-framed
porch and C19 doorway. The north wall of the north aisle has one C13 lancet
to the west and one C19 lancet to the east. The chancel has one restored
single lancet to the left and a pair of similar lancets to the right. A
single trefoil headed light of c1300 on the north side is partially obscured
by the C19 vestry. C19 east window of three lights. Interior: west tower;
timber structure of tower is revealed to the interior, supported on massive
posts with scissor braces to north and south and diagonal braces to the east
arched over the tower arch. Early C16 arched braced collar to roof of nave.
Low arcade of three bays to north aisle with circular piers and moulded
capitals and bases, 2-centred arches of two chamfered orders, all much
retooled. Re-used C12 piscina in chancel with top of scalloped pillar,
square drain. (RCHM, Vol I, p 208; BoE,-p 264-265).