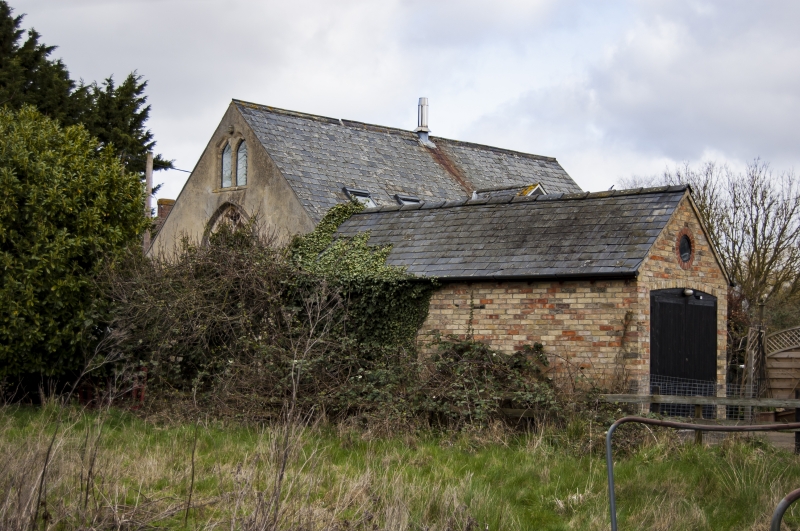 Chapel of Ease to Soham minster Church, converted to a house in
1970s, retaining much of the fabric and original detail of the
C14 nave and rebuilt C19 chancel. Clunch and Barnack limestone
with steeply pitched roof of slate. West end has pointed arches
to two original bell-cote openings with a mask above. Below is
a restored C14 window of three lights with reticulated tracery
in a two-centred arch. The label and mask stops are original.
Both north and south walls have original two-stage buttressing
of Barnack limestone at the corners. The south doorway is of
clunch. Two-centred arch of two chamfered orders with a moulded
label and mask stops. One window of two lights in square head
with moulded label and mask stops. The north doorway is also
two-centred but of only one chamfered order with a moulded label
and very worn mask stops. One two-light window in a square head
with splayed reveals. C19 chancel of yellow gault brick with
low pitch, slate roof. One reset head mask in east gable end.
Interior. The chancel arch is two-centred and of two chamfered
orders. There is a two-centred chamfered arch to a piscina in
the south wall of the nave. The font is C13 with an octagonal
bowl on a modern stem. The late C17 communion rails have been
removed and reset in the first floor but the early Cl9 pulpit
and steps are still in their original location. The staggered,
tenoned purlin roof is of C17 construction.
Pevsner: Buildings of England, p.300.