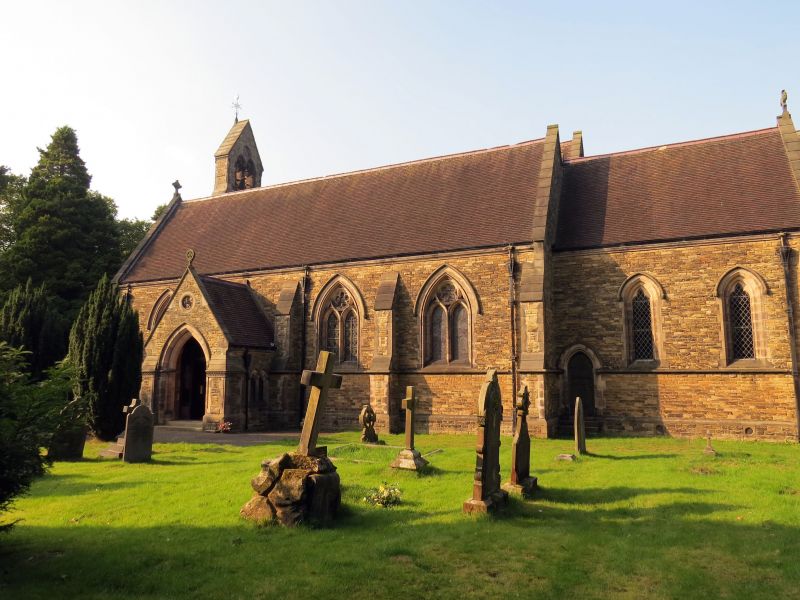 Church, 1863, by Sir George Gilbert Scott. Squared rubble with ashlar
dressings and a plain tile roof. Nave with south aisle, chancel,
south western porch and north eastern vestry. Nave, western front:
slightly projecting plinth common to whole building and string course
at level of the window sills. To the left are three projecting
symmetrically disposed bays; at right, recessed, is the end of the
aisle under a separate gabled roof. The projecting portion at left
has a central doorway with moulded ashlar surround and pillarettes to
either side of the double doors and a hood mould with male and female
figurehead label stops. Gablet above with roundel enclosing a flower.
Above is a 3-light window with trefoil heads to the lights and
hollow-chamfered relieving arch with trefoils above the lateral
lights. Above this is a canopied niche containing a figure of Christ
and above that a bellcote with two lancet openings which have
gadrooned corbels to their sides and colonettes to the corners, and a
trefoil to the gablet which is surmounted by a weathercock.
Buttresses with offsets to either side of this central bay and beyond
these lancets with buttresses to the corners. The recessed southern
aisle at right has a central 3-light window with trefoil heads to the
lights and an octofoil to the apex and a hood mould with figurehead
label stops; cross-shaped finial to the gable. The south face has 4
bays to the aisle with two pointed lights and a cinquefoil to each
window, the bays divided by buttresses with offsets. To the second
bay from left is a gabled porch with chamfered pointed arch with
semi-octagonal colonettes to either side, a hood mould and figurehead
label stops. To the corners are heavy clasping buttresses with a
frieze of foliage ornament below a terminating offset. Trefoil to
gable and cross to summit. To the side walls are paired
trefoil-headed lancets. The north side has 4 bays with similar
buttresses and fenestration and a blank half-bay at right. Chancel:
south face has a chantry chapel connected to, but of less width than,
the south aisle. This has a doorway at left with, at right, two
trefoil-headed lancets with hood moulds and figurehead label stops.
To right of this is one recessed chancel window of two lights with
central and lateral pillarettes and deeply undercut and moulded
tracery with a cinquefoil to the apex. The northern face has a gabled
vestry projecting at right with a 2-light window and a cinquefoil
over, and 2-flue chimney stack to the gable. To the left of this are
two windows similar to that seen on the southern side. The eastern
end has a chancel window of five lights on a raised string with 3
lights deeply moulded and undercut and with pillarettes to the
mullions, as to the north and south sides. To the apex are 2
quatrefoils with a cinquefoil hood mould over and label stops showing
a bishop and queen. The eastern end of the chantry chapel, recessed
and at left has paired trefoil-headed lancets dissected and flanked by
colonettes. To the gable is a cinquefoil in a richly moulded circular
surround showing foliage.
Interior: Chamfered window reveals to nave and chancel. The piers of
the south aisle are of quatrefoil section with hood moulds and
figurehead label stops. Barrel vault to the aisle. The nave has
arched braces with cusping springing from decoratively carved corbels
and has arched wind bracing. The chancel arch has grey marble columns
to either side and richly moulded foliate capitals. There is a double
column of grey marble dividing the chancel from the chantry chapel and
further columns of grey and green marble with lushly carved capitals
at either side of the eastern window. The Wilbraham chantry chapel is
divided from the south aisle by a richly wrought iron screen which has
three arched openings and quartered circles to the lower body. To the
left of the eastern window is a trefoil-headed niche with a gablet
above and colonettes to either side holding a terra-cotta bust by
A Carrier, 1854, of Randle Wilbraham. Octagonal alabaster pulpit to
left of chancel arch with arcade openings divided by marble colonettes
and with mosaic inlay. Similarly inlayed alabaster font in the form
of a chalice of quatrefoil section on a stepped base.

Goodhart-Rendel noted of the church "Taking things all round, I like
this best of any Scott church I have seen.....Everything seems to me a
triumph of the academic type of good Gothic design....there is nothing
but safety first - but it is safety".

Not only the design but the craftsmanship is of high quality.