A Grade I Listed Building in North Middleton, Rochdale 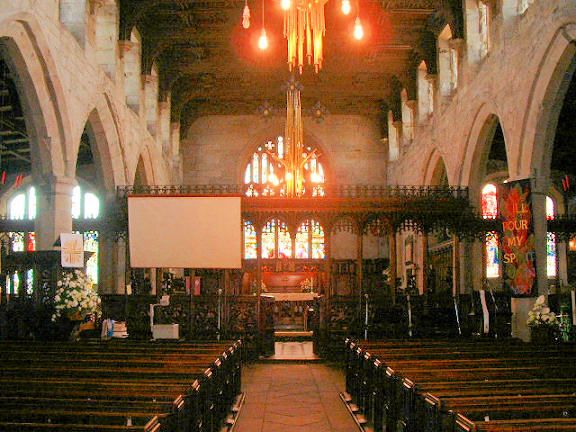 MIDDLETON NEW LANE
SD 80 NE
(south side)
2/17 Church of
15/3/57 St. Leonard
G.V. I
Church. Priests door C13; south porch, tower and south
arcade 1412 for Cardinal Langley of Durham; the remainder
largely of 1524 for Sir Richard Assheton except for vestry
of late C17, top stage of tower added in c. 1667, east
window of 1847, organ chamber 1920 and north vestrys of 1958
by G. G. Pace. Dressed stone with weather-boarded top stage
to tower. 4-bay aisle (5-bay north) with weathered plinth,
weathered buttresses and castellated parapet with foiled
panelling. Cusped 3-light aisle windows and uncusped 3-light
clerestory windows below flat heads. The porch is ornately
carved with niches and foiled panelling around the arched
doorway which has a crocketed ogee hoodmould. The C17 vestry
is considerably lower to avoid obscuring the windows above.
Rainwater heads on the north aisle record a restoration of
1869, similarly, JS 1852 appears on the castellations. The
4-stage west tower has diagonal buttresses, a weathered
plinth, 2-light windows on the first and second stages,
clock faces on the third, and a curious weatherboarded top
stage which was designed to accommodate a new peal of bells
and has gables on each side. The C20 addition is in a free
Gothic style. Interior: double-chamfered nave arcade with
octagonal piers. The roofline of the 1412 church is clearly
visible above the tower arch which is itself a re-set Norman
chancel arch of 3 orders with scalloped capitals, curious
rams' heads carved on the bases and 2 orders of zigzag in
the arch which is now pointed. Rennants of the Norman church
also exist in fragments of a billet frieze used in part of
the north arcade. C15 rood screen without its original loft
has heraldic dado panels which have themselves been
restored. Stall with misericords and traceried ends with
poppyheads including carved animals. Hopwood box pew
(probably late C17) in south aisle with barleysugar
balusters. C19 font and lectern. Window commemorates the
victory of Flodden Field 1513, the event which prompted the
rebuilding of the church by way cf thanksgiving. Various C16
and C17 brasses. C18 and C19 decorated wall tablets. The
church enjoys a commanding hilltop position.