A Grade I Listed Building in Foxton, Cambridgeshire 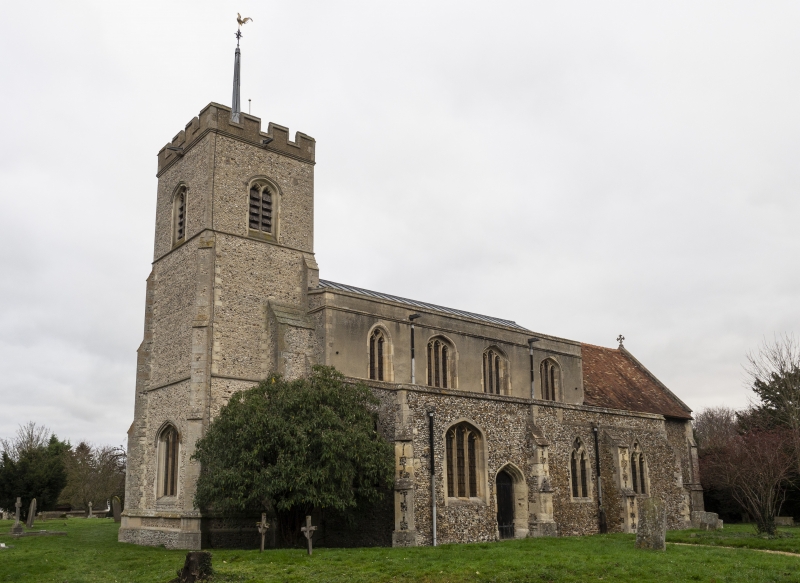 GV
I
Parish church. Late C12 or early C13 chancel and nave in a continuous
range. North and south nave arcades and aisles of early C14. Clerestory,
one bay of south arcade and west tower, c.1475. Restored 1876-86.
Fieldstone, flint with limestone dressings. West tower, late C15, embattled
and of three stages on plinth. Three stage diagonal buttressing. Cut down
spire. Central gargoyle to main cornice. Restored west window of three
cinquefoil lights in four centred head. Bell stage has two coupled openings
each with cinquefoil head in four centred arch. The gable end of an earlier -
nave roof is visible internally in the east wall of the tower. Nave: Late C12
or early C13 origin with walls pierced by north and south arcades early in
C14. Roof raised for clerestory, C15. Clerestory has on each side three
windows of clunch, each of three cinquefoil lights in a four centred head.
However a window on each side at the west end is earlier and has reticulated
tracery in two centred arch. The existence of the gable of an earlier roof
may indicate that there was a C14 clerestory, replaced or rebuilt in C15.
South aisle, early C14, extended by one bay to the west in c.1475. Two
windows, C14, of two trefoil lights with reticulated tracery. (Meldreth and
Grantchester parish churches with similar fenestration). One three-light
window, C15, much restored to C15 bay addition. The south doorway has been
much restored. Chancel: late C12-early C13. Externally of fieldstone with
steeply pitched tiled roof. Rood loft staircase in angle between south aisle
and chancel. South wall has an original window of two lights with Y tracery
in two centred arch and an early C14 window of two trefoil lights. East wall
has three original lancet windows in a much restored wall. The north wall
has similar fenestration opposite that of the south wall. North aisle with
two early C14 windows of clunch with reticulated tracery. The porch and
north doorway date from c.1876-86 restoration. Inside: Nave arcade, south
side is probably late C13 or early C14. Originally of two bays. Two centred
arches of two chamfered orders on columns of quatrefoil section with moulded
bases and capitals. The large bay to the west was added in C15, probably
contemporary with the tower. The north arcade is slightly later. Three
bays. Two centred arches of one wave and one hollow moulded order with
broach stops on similar early C14 columns of quatrefoil section. The roof is
c.1475 with arch braced tiebeams, moulded main beams with carved bosses,
including those of the donor and his wife, at the intersections. North aisle
has a North chapel at the east end with screen of C15. Oak, with entrance
front in eight bays and two stages. The lower stage is blocked and has
modern panelling. Open upper stage with subcusped ogee arches in square
heads and vertical tracery to the spandrels. Embattled cornice. The south
aisle has an early C14 piscina in south wall. Trefoil cusping to ogee arch
with label and finial. Quatrefoil drain. Chancel arch of wood, restored
c.1876. Two centred arch, moulded, C15 and associated with the rood screen
below. The box framing above the arch is also C19. The screen has much
restored work to the upper stage but the closed, lower stage has a frieze of
running foliate ornament above panels with subcusping to two centred arches
in square heads with vertical tracery to spandrels. Each of the nine bays is
divided by a pilaster buttress similar but larger than those at the pew ends
in the nave and aisles. Rood loft stair opening in four centred arch. The
present rood is c.1950. The chancel has moulded band at original sill
height. The rear arches of the three lancets in the east wall are two
centred with dog-tooth ornament to label carried over each arch. The roof is
C15 and similar to that over the nave at St. Edmunds, Hauxton (q.v.).
Steeply pitched and in four bays, it has short king posts on arch braced
raised tie beams. The intersections in the roof are enriched with carved
bosses. The pews in the nave and aisles are late C15 to early C16, probably
contemporary with chancel screen. There have been some repairs. There are
two stage pilaster buttresses, and roll moulding to the rail of the pews.
There are some unmoulded poppy head finials to the pew ends in the chancel.
Font: The bowl is C12 or earlier origin and is incorporated in later work.