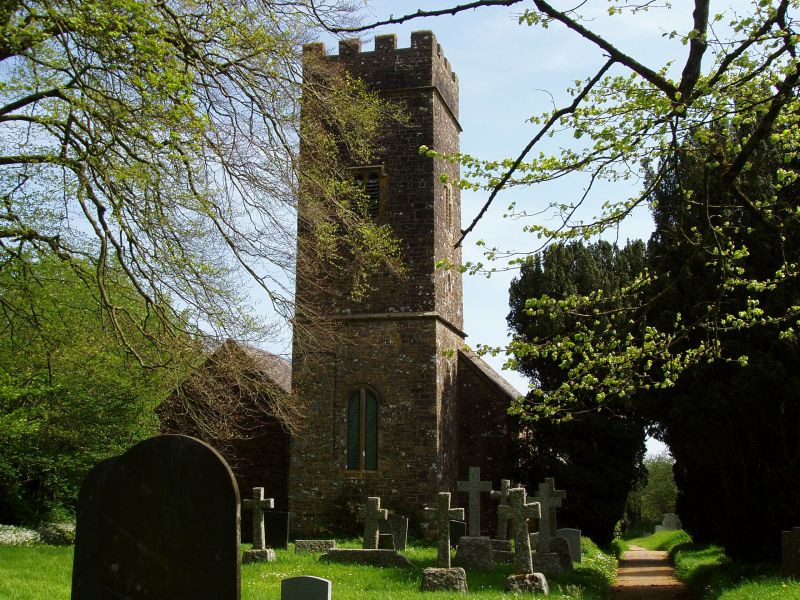 Parish church. Late C13 origins with C14 fabric, remodelled in C16 restored circa
1900 - 1910. Stone rubble walls. Gable-ended slate roof.
Plan: nave, north aisle and chapel, west tower and south porch. The oldest feature
of the church is the Early English window at the east end of the north chapel. The
church was then heavily rebuilt in the Decorated period as can be seen in the nave
and chancel. The north aisle is evidently an early C16 structure with a straight
joint clearly visiole between it and the chapel. The south porch is probably C16 or
C17. The tower was destroyed by lighting in 1879 and for 20 years the church was in
ruins but was re-opened in 1904 and the tower partly re-erected in 1892 and rebuilt
in 1910 - 11.
Exterior: rebuilt 2-stage battlemented west tower with simple 2-light west window
and belfry openings. North aisle has 2 tall early C16 3-light granite mullion
windows witn segmental heads sandstone 2-centre arched chamfered north doorway.
Straight joint visible between north aisle and chapel. Chapel has small 2-light
cinquefoiled mullion on north wall. Early English east window to chapel of 3
stepped lights with ogee heads. Fine Decorated east window to chancel with
reticulated tracery. Two 2-light Decorated windows with geometrical tracery on
south wall of chancel and one towards west end of nave which is a C19 facsimile.
Gabled south porch with tall pointed arched doorway which is chamfered. Slate
sundial above dated 1808.
Interior: porch roof is plastered over. C14 south doorway with 2-centred arch and
quarter roll moulding. Massive medieval studded door with elaborate fleur-de-lys
hinges. Internal walls are unplastered. 5-cay north arcade - the 2 arches to the
cnapel are much lower. Pevsner A-type piers with moulded segmental arches and
capitals with high relief carving. The eastern arch has a 4-centred head. Pointed
rubble tower arch; no chancel arch. The east and south windows of chapel and
chancel have chamfered rear arches. C14 piscina with trefoiled head. Simpler 2-
centred piscina in chapel. The roofs are all plastered over - the chancel and nave
have just the purlins exposed which have been renewed in the chancel. Those in the
nave appear older and it also has a carved wall-plate. The North aisle has
chamfered and moulded ribs exposed on its north wall is a carved wall-plate that
projects slightly and is supported on carved wood corbels. The roof to the north
chapel nas acarved wall plate exposed on its south side and on its collar purlin.
The rood beam survives over the chapel and is carved on the east side. Late C17 or
early C18 barieytwist altar rails. Later C17 5-sided pulpit with arcaded panels and
paired Ionic columns on each corner, carved frieze and dentilled cornice. The steps
have been renewed but behind them, against the wall, is a piece of carved wood in 3
panels with lozenge design.
Behind the pews at either side the walls are lined with C18 fielded panels which
reputedly came from earlier ones. The present seating is very plain and dates from
late C19 or early C20. Early C20 rood screen.
Apart from towards the rear the nave is floored with medieval Barnstaple tiles, some
also in aisle. Octagonal C14 granite front on circular stem. Good plaster royal
coat of arms on north wall dated 1664.
Source: Beatrix Cresswell - Notes on Devon Churches in the Deanery of Holsworthy