A Grade I Listed Building in Ashton-under-Lyne, Tameside 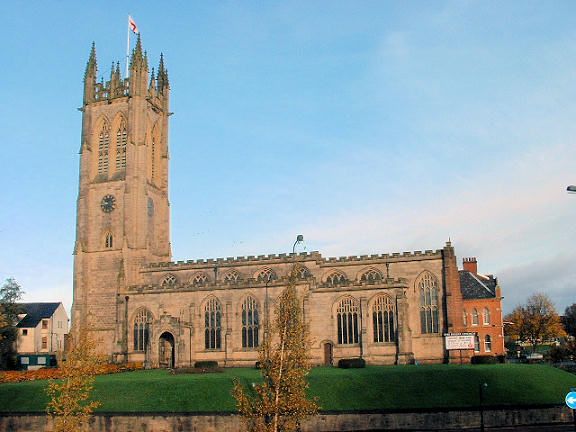 Church. The C15 church was virtually rebuilt in C19. North
side 1821, nave and south side 1840-44, east wall of chancel
1883, tower 1886-8 by Crowther, north porch c.1920. Ashlar.
3-sided gallery housed within aisles; chancel and a west
tower. Victorian Gothic; largely in a Perpendicular style. 5-
bay nave and 3-bay chancel with weathered plinth, weathered
buttresses and a castellated parapet which steps down to
mark the chancel. 3 and 4-light transomed windows with
interlaced tracery to the north aisle and clerestory and
Perpendicular tracery elsewhere including the 7-light east
window. Hoodmoulds have carved head stops, some on the south
side dating from C15. North and south porches. Imposing 4-
stage tower with set back and gableted buttresses topped by
crocketed pinnacles, heavily moulded west door surround, 5-
light window, clock in third stage and two 2-light belfry
windows in each face. The castellations of the parapet are
pierced and enriched. The C19 gritstone facing conceals
parts of the medieval red sandstone walls. Interior: the
arrangement is unusual in that only a fraction,of the
chancel is taken by the sanctuary, there is no choir, and
the seating, which spills over from the nave,faces west
towards the 3-decker pulpit which is against the north
arcade. The chancel is only defined by the chancel arch
which bears the royal coat of arms and by a slight drop in
ceiling level. The plastered ceiling beams are supported on
cambered beams and have enriched and decoratively painted
bosses and panels. The heavily moulded columns of the nave
arcades support timber galleries part of which formed a
chantry chapel in the C18. Apart from the arrangement, the
most noticeable feature is the heavy decoration of stone
and timberwork. The arcade spandrels, the chancel arch, the
timber galleries, and many of the fittings are covered with
intricate mouldings and blind arcading. Early stained glass
of late C15 and early C16, now in the aisles, originally
came from the east window. A total of 18 scenes depict the
life of St. Helena, members of the Assheton family and 3
saintly kings. John Postlethwaite wall memorial, 1818 by T.
McDermott. A noteworthy church most of which can be
accredited to the 1840s, and yet not at all the
ecclesiological arrangement or appearance one would expect
for that date. W. M. Bowman, England in Ashton-under-Lyne,
1960. Stained glass - Transactions of the Lancashire and
Cheshire Antiquarian Society, 1902.