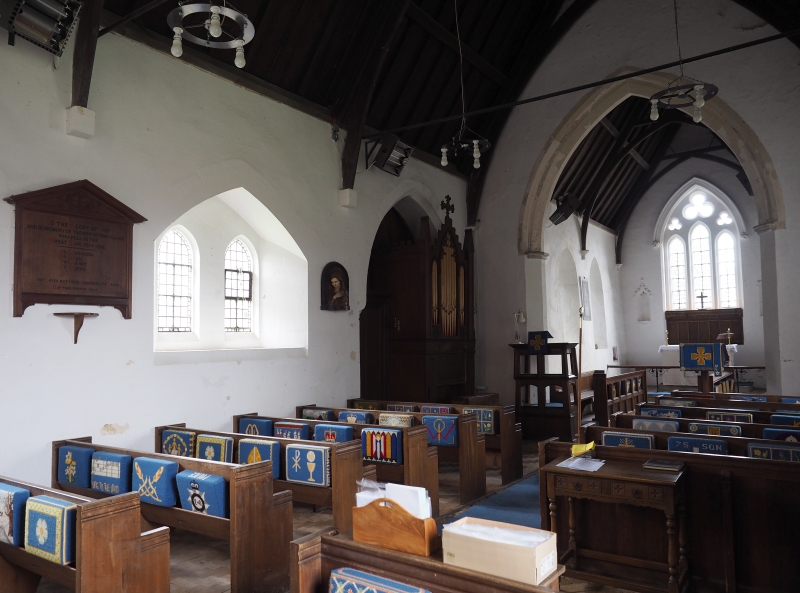 Parish church. C13 with restorations of 1849, 1876 and 1905 by Carbe. Field
and rubblestone with limestone dressings. Plain tiled roof with crested ridge
tiles and restored end parapets. West end of nave has double bellcote under a
gable with vesica opening to the spandrel. The bellcote is carried on three
carved stone corbels. Plan of nave and chancel. Nave has diagonal
buttressing to south west and north west corners and a restored west window of
a single light in a pointed arch and moulded label and stops. C19 gabled
porch has two-centred outer arch with label and stops and diagonal
buttressing. The inner arch is two centred and chamfered. The chancel has
two C13 lancets in the south wall with modern labels. As in the west wall,
there is reused moulded stone in part of this wall. Rebuilt east window of
three lights with similar stops. North wall also has two C13 lancets.
Interior: West wall has original deep splay to lancet window and similar
splays to paired lancets in nave south wall. The north window openings have
modern rear openings. Two centred chancel arch of two chamfered orders on
chamfered responds with moulded capitals. C19 organ bay and vestry on west
side of nave. Original rear arches to two lancets in north and south chancel
walls each. Piscina, C13, of two bays each in two centred arch. Font: C13,
square bowl with chamfered courses on modern stem and base. Wall monument on
west wall James Fortrey (d.1719), son of Samuel Fortrey, of Fortreys Hall,
Byal Fen, in Chatteris parish. James was page of honour to Mary of Modena,
Duchess of York and wife of James II. He was also Groom of the Bedchamber to
James II.