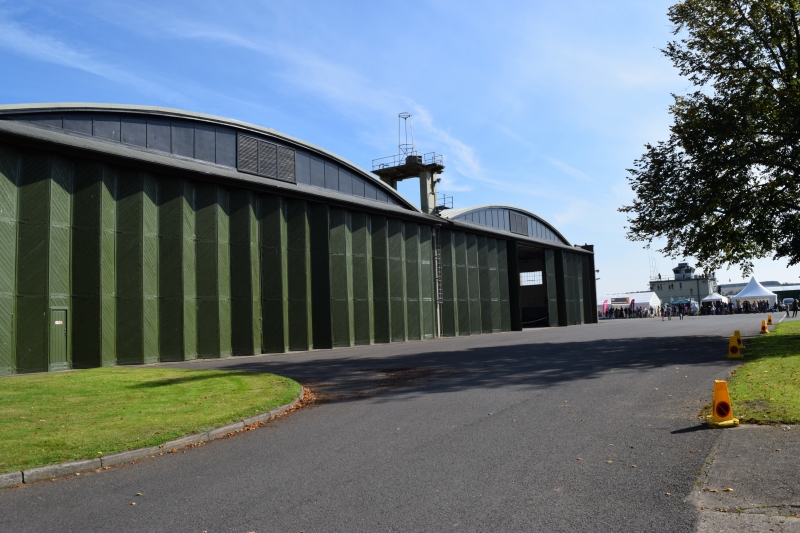 Aircraft hangar, one of a group of three. Group of 3 paired aircraft storage sheds. 1917, by the War Office's Directorate of Fortifications and Works. Drawing No 332/17. Brick piers, curtain walls and internal pillars, all painted, timber roof trusses, profiled steel covering, but felt or corrugated steel roofing to annexes.

PLAN: The three hangars have been planned in-line facing the flying field, with a larger gap between easternmost (84) and central (79) hangars, formerly occupied by a service hangar of the same date. Each hangar is a double shed and of standard plan, in 15 bays, overall length 170ft and each shed of 100ft span; the roof is a double very flat segmental arch, carried at the central valley to compound brick piers; giving clear access through each bay. Each hangar has a low, lean-to annex to the long outer walls, in varied formations. All sheds have full width and height sliding/folding doors.

EXTERIOR: The opening ends have 'Essavian' sliding/folding doors with diagonal timber running to an overhead track with a deep apron above running the full width of the double shed, to compact brick pylons at each end. Building 84 has, at the central valley to the W end, a steel access ladder to a signals (neon beacon) platform erected 1931 in brick with flat concrete roof slab, and simple pipe handrails, rising approx 4m from the valley. The long flanks have raking buttresses carried up to the eaves soffit, with half-brick curtain walls between. Each end bay is plain, the remaining 13 bays have a full-width steel casement window in 27-panes, alternate bays also incorporating a 6-pane pivoted opening section. Above these windows is a deep apron band. At each end the pylons are in the form of a square shaft.
The roofs are in profiled steel in flat segmental form, with continuous ridged patent glazing roof lights (to the central 13 bays), and with a line of patent glazing each side of the central valley. The eaves have a plain painted fascia with gutter. The segmental gables above the door are plain, with regular vertical divisions.
The annexes built as low lean-to structures against the long sides of the hangars formerly housed on the S, flying field side, accommodation for the flight commanders, pilots and clerks, plus stores and a boiler room. To the N there were electrical and radio rooms, with equipment stores and offices. The annexes were modified variously in 1928 and 1935, and to Building 84 they include a 2-storey section built in 1928 on the S side to raise the status of the hangar to a headquarters for 19 Squadron. Walls are painted half-brick thickness, but the 2-storey section has a steel framework, with cavity walling.
Windows are steel casement, originally in 16 panes, and similar in detail to those to the sheds, but later of a more domestic kind, but all in small panes. Roofs are either corrugated steel or felt on boarding. Several bays have doorways. Building 84 has a full length run to the S side, modified in 1928, with mainly small-pane casements, and in bays 3/ 4 a deeper section formerly with the pilots' rest room; at the E end are some plain later windows. The N side has a 13-bay annex, with 2 gaps.

INTERIOR: Close-spaced timber 'Belfast' trusses are carried to the buttresses in the outer walls, and the central row of piers. The trusses, all whitewashed, have a flat bottom chord and a bowed upper profile, formed in a series of straight members. All truss members are small-section softwood, with doubled main members sandwiching a close-spaced diagonal grid infill; at the end supports the trusses are strutted to shaped stone corbels, and this 'knee' area is strengthened by diagonal close-boarded sheeting. Longitudinally there are 5 sets of simple cross-bracing, and diagonal sheathing on small purlins carried to the roofing. A central row of brick oblong brick piers, approx 1.6m x 0.6m has a narrow central opening to an arched head; each side is a modelled stone corbel carrying the roof strutting, and running between piers to support the gutter and provide stiffening is a diaphragm, one brick thick, on flat segmental arches. Floors are in concrete.

HISTORY: Duxford represents the finest and best-preserved example of a fighter base representative of the period up to 1945 in Britain, with a uniquely complete group of First World War technical buildings in addition to technical and domestic buildings typical of both inter-war Expansion Periods of the RAF. It also has important associations with the Battle of Britain and the American fighter support for the Eighth Air Force. See description of a hangar for further historical details.