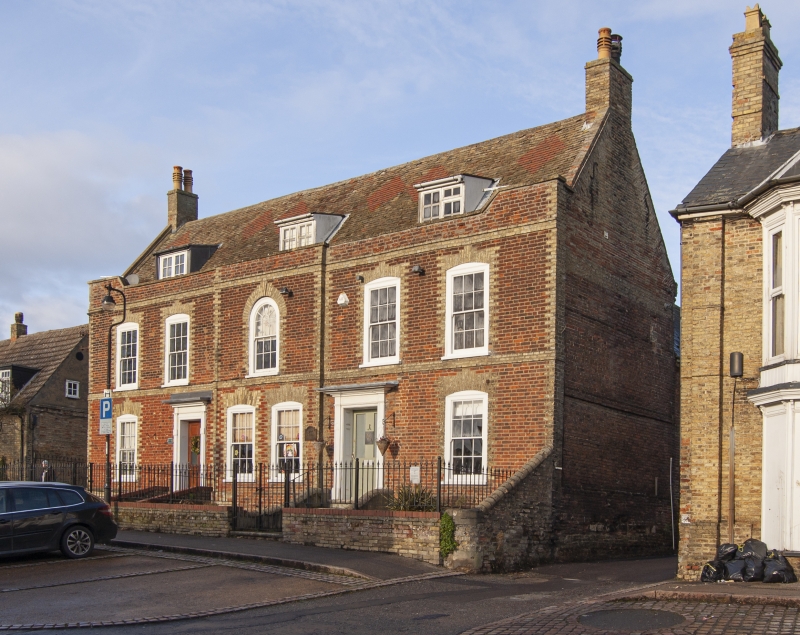 Former pair of houses, then house, bank premises, and shop. Early C18. Red brick
with rubbed and gauged white brickwork to dressings and details. Plain tiled
gabled roof having parapetted front elevation with swept ends and tumbled
gable end parapets and end stacks. L-plan. Two storeys and attic. Three
modern dormers. Parapetted facade in three bays framed by main cornice and
rusticated quoins in white brick and divided by plat band between the storeys.
At first floor the slightly projecting centre bay has a round-headed arch to a
single twelve-pane hung sash with radial glazing bars to the head in a rubbed
white brick surround with raised key block. The flanking bays each have a
pair of later twelve-pane hung sashes in original openings with square heads
and similar white brick rusticated surrounds with flush brickwork to the
voussoirs. At ground floor the centre bay has a similar pair of windows and
the flanking bays each have a doorway with reeded doorcase enriched with
bosses, a flat hood on brackets with panelled bivalve doors. The outer bay
has a similar hung sash in its original gauged white brick surround. There
has been some repointing of the front. The brickwork is of Flemish bond. The
east gable end wall preserves the most extensive area of original brickwork.
The interior has been extensively altered.