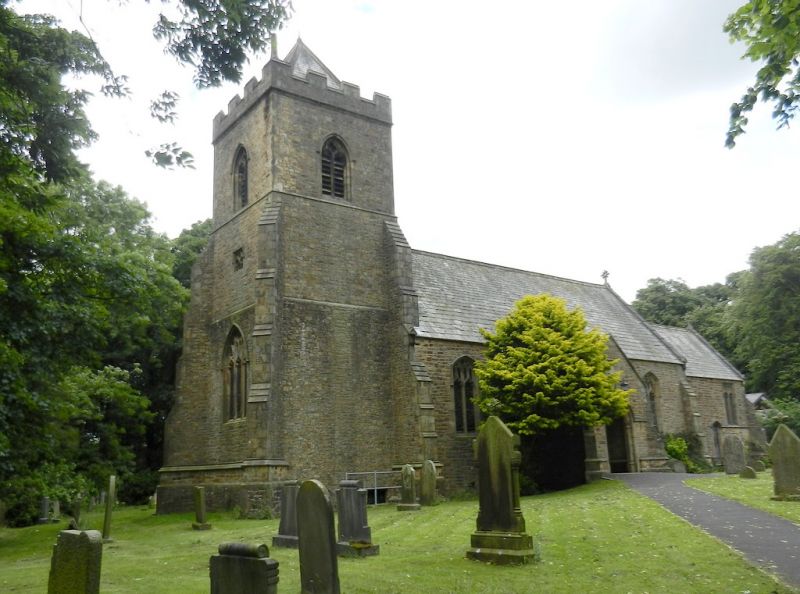 Church, 1863, by Corrie. Sandstone rubble with slate roofs. Comprises a
west tower, nave with north aisle and south porch, and lower chancel.
Tower has diagonal buttresses and a pyramid roof behind an embattled
parapet. The bell openings are of 2 cusped lights under a pointed head.
The west window is of 3 cusped lights with Perpendicular tracery. The nave
has one window to the west and 2 to the east of the porch. They are of 2
cusped lights with depressed pointed arches and Perpendicular tracery. The
porch has diagonal buttresses and outer and inner doorways with pointed
heads. The north aisle has 3 2-light windows with flat heads and cusped
ogee lights. The south wall of the chancel has a window of 2 cusped
lights with flat head and Perpendicular tracery. To its left is a priest's
door, with a smaller window further left. The east window is of 4 lights
with Perpendicular tracery and pointed head. The interior is of brick with
sandstone dressings. The 4-bay arcade has pointed arches chamfered in 2
orders on columns of 4 clustered shafts. The tower arch is of 2 chamfered
orders dying into the responds. The chancel arch is similar, but with
attached shafts as responds. The nave roof trusses have arch-braced
collars, alternate trusses having the braces rising from hammer-beams.
Under both the tower and chancel arches are timber screens with tracery
decoration. The chancel has a boarded waggon roof and carved choir stalls
and communion rails. Both the pulpit and the font are of stone with
decoration in relief. The piscina has a traceried head; the twin sedilia
are of timber. Three of the C20 windows are said to be by Morris & Co.