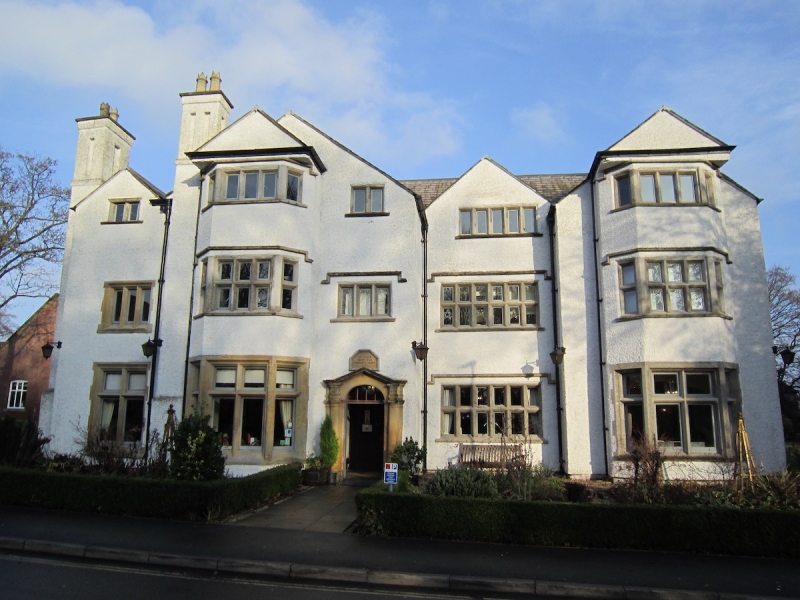 TYLDESLEY CHURCH ROAD
SD 60 SE
(north-west side)
2/43 Administration
block at Astley
Hospital
(formerly listed
18/7/66 as Dam House)
II*
House, now hospital. Recut stone above entrance reads
"erected by Adam Mort and Margaret Mort 1650" but with
extensive additions to rear in early and late C19. Rendered
brick and brick with stone dressing and slate roof. 5 x 3
bays with 3 storeys. The C19 ranges which make up the
quadrangle are largely of 2 storeys and continue to use
mullioned windows and vernacular motifs. The elevation
consists of gabled crosswings which project to either side
of the house-part, a 3-storey porch within the left angle
and an additional bay to the left. The porch bay has a
studded, cross-boarded door with Doric columns, an open
pediment and a fanlight. Each crosswing has a canted 3-
storey high bay window with enlarged openings on the ground
floor. Otherwise the majority of the double-chamfered stone
mullion windows appear to be unaltered (on front only).
They have from 2 to 6 lights and the principal rooms have
transoms and hoodmoulds. 3 gables and projecting chimney
stacks to side elevations. Rear is an extension of early C19
as is the 4-bay wing to rear right which includes a chapel
at first floor level. The other 2 sides of the quadrangle
are in stock brick, of late C19, and include a coach house.
Interior: altered on the lower storeys but retaining many
original and Regency features including an inglenook
fireplace in the left room, beams, elaborate Gothickdoor
surrounds and doors. Splendid Gothic roof trusses to chapel.
The upper floor retains 6 and 2-panel doors with strap
hinges and timber-framed crosswalls with wattle and daub
infill are fully exposed. Brick vaulted cellar - C19.
Victoria County History of Lancashire, 1907.