A Grade I Listed Building in Madingley, Cambridgeshire 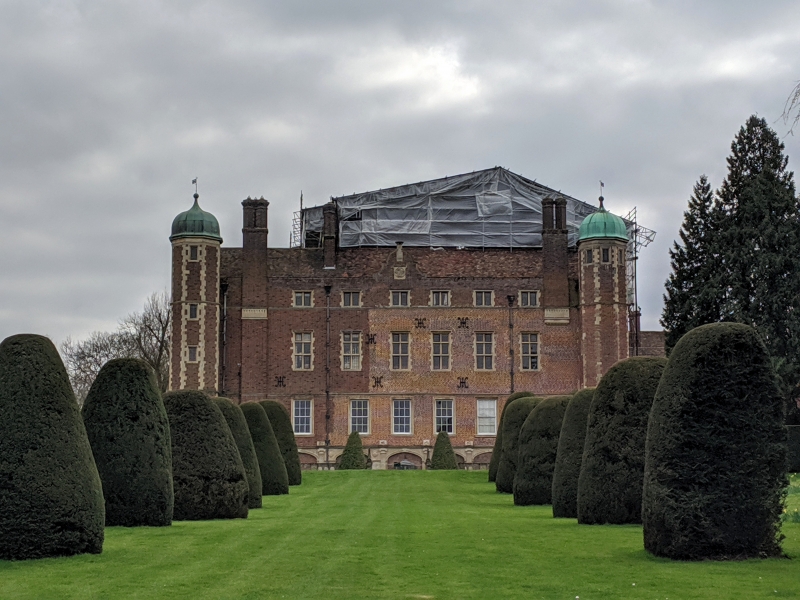 Mansion House. Mainly mid and late C16, but with alterations and additions
of C17, C18, C19 and early C20. Red brick with burnt brick diaper work, and
limestone dressings of reused, coursed stone probably from Anglesey Abbey.
The south wing is constructed of coursed limestone ashlar probably from the
same source. The later work is also in red brick but without diaper
patterning. Parapetted, tiled roofs, with crow-stepped end parapets and
shaped gable ends. End, side and internal chimney stacks, with rebuilt upper
courses. Plan of mid-C16 house of main east range with upper and lower
halls, through-passage to south end and principal private apartments
approached from newel stair turret at south-east corner. Kitchen, buttery
and pantry were in the south range. Late C16 principal addition was a long
solar or parlour north wing including a gallery. Hall range of two storeys
and attic. Original stonework to plinth and enriched main cornice. Roof
probably raised late in C16. Fenestration of C18 and later, hung sashes,
with Ketton stone surrounds. Original entry in two storey, embattled porch,
buttressed, with C18 oriel window above with original carved stone panel and
outer archway. Two-storey oriel window, C18 and C19, with reset C16 carved
panels, to high end of hall. Stair turret to south-east corner has ogee roof
of copper and original brickwork and stone dressings, some restoration, and
rebuilt or added upper storeys. The south wing with later openings, some of
C17, and a jarderobe turret to south wall. The north wing, altered in C18,
partly demolished C19, and east end rebuilt early C20, is of three principal
storeys and an attic framed by projecting newel stair turrets. The loggia at
ground floor, now blocked, is late C16 but much restored early C20. Other
additions were made in C18, mostly of red brick. The stable courtyard of C18
origin was rebuilt in 1951 but the central hexagonal clock cupola of 1755 was
incorporated in the north range. In the early C20 the gardens were
redesigned and the terraces flanking the north wing were constructed. The
former stables and coach-house have been rebuilt since the Hall was acquired
by Cambridge University in 1948. Inside. Many alterations have taken place
on the interior. However the principal features that survive are the mid C16
newel staircase in the south-east turret, the contemporary hammer beam roof
over the hall range reputed, on documentary evidence, to have been reset from
Histon Church; the early C17 wall painting in the murals room, the Baroque
ceiling panelling and fireplace of the saloon, and the c.1724 main staircase
in the north wing. A more detailed description can be obtained from the
R.C.H.M. West Cambs, mon.(2). The mid C16 house was built for Sir John
Hynde. Subsequent additions were made by his descendents. The house passed
to the Cotton family in 1647 on the marriage of Jane Hynde with Sir John
Cotton. In 1861 it was rented by Queen Victoria for the Prince of Wales
whilst he was at Cambridge University. The Prince Consort stayed here in
November 1861. It was acquired by Col. T.W. Harding in 1905 who was
responsible for much of the restoration. In 1948 it was sold to Cambridge
University.
R.C.H.M. West Cambs., mon.(2) Plates 40,110,111, 128 and 135
Pevsner: Buildings of England, p435
Cambridge University: Madingley Hall