A Grade I Listed Building in Slapton, Devon 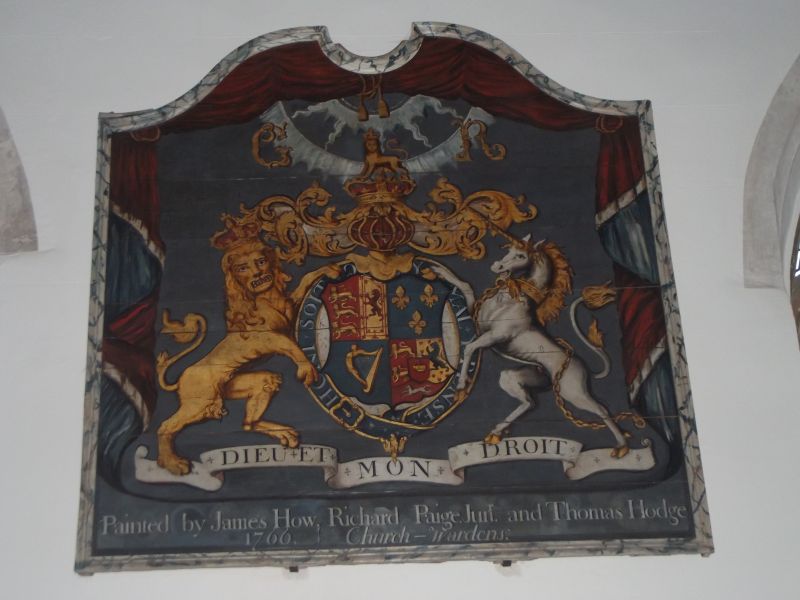 Parish church. C13 or early C14 with tower. Early C14 chancel. C15 or
early C16 nave, aisles and north porch; restored in 1905. Slate rubble,
slate roofs with stone-coped gable ends.
Plan and development: The existing church comprises:- nave and chancel 4-
bay north and south aisles, 2 storey north porch with stair turret in the
north west angle and west tower with spire.
Bishop Stapledon dedicated the altar in 1318 and the chancel is of this
date. The west tower is probably C13 (the first rector 1274-5) or also
early C14. After the foundation of the Collegiate Chantry in 1372 the
parish church lapsed into poverty, its tithes being appropriated to the
Chantry, one of whose priests was appointed to the church. The nave was
rebuilt when the north and south aisles and north porch were added in the
C15 or early C16. According to Davidson (1842) west galleries were erected
in 1832. The church was restored in 1905 at a cost of £1,000.
Exterior: North aisle has one 3-light and two 4-light C19 restored
perpendicular windows with buttresses and polygonal stair turret between;
similar 3 and 4-light east and west windows in north aisle have gabled 2 or
3-storey porch on right (west) end of north side of aisle with polygonal
stair turret in west angle with moulded embattled parapet and small lancet;
massive roll-moulded and hollow chamfered almost round arched doorway with
trefoils in spandrels and label; 2 tier window above with round-headed
lights and hood mould with corbel above. Inner doorway has double ovolo and
fillet moulded 2-centred arch Beerstone frame and Medieval studded door with
large wrought-iron hinges and circa C17 cover moulds.
The south aisle has C19 3 and 4-light perpendicular windows similar to those
on north aisle and with buttresses between with set-offs; similar windows in
east and west ends of south aisle. Small north doorway with doublecyma 2-
centred arch.
On each of north and south sides of chancel a C14 2-centred arch 2-light
cusped tracery window with hood mould; small priest's doorway on south side
has double ovolo 2-centred arch with hoodmould and broach stops. 3-light
east window with restored circa C15 tracery and hood mould. Chamfered slate
plinth around whole of church except for chancel.
Unbuttressed west tower with slight batter and diminished top stage with
stone octagonal spire with rendered broaches and moulded finial with
weathervane. The top stage has slit bell-openings with slate louvres and
similar slits below on north and south sides. Large 3-light west window
with C19 perpendicular tracery and small C19 perpendicular window below
probably block doorway. In the angle of the tower and south aisle a circa
late C19 lean-to outshut.
Against the porch chamber stair turret is what appears to be a short section
of a cross shaft with chamfered corners.
Interior: The walls are plastered, the floors paved in slate. Hollow
chamfered Beerstone rear arches. Beerstone 4 bay north and south arcades of
Type A with wide 2-centred arches, shafts at the corners of the piers, the
chamfer between rising into the arches (hollow chamfer on the north arcade
and wide recessed chamfer on the south side); carved foliage capitals to the
shaft only and with moulded bases. Very tall narrow 2-centred tower arch
with chamfered imposts.
Late C19 arch-braced roof on wooden corbels to nave aisles and chancels.
The east window has nook-shafts. Small C13 or C14 piscina on south side of
chancel with cusped moulded arch with broach stops. Rood stair doorway
restored. Porch chamber doorway has double ovolo 2-centred arch. Small 2-
centred arch piscina on south side of east end of south aisle. Good but
restored carved wooden screen across nave and aisles complete with parclose
screens in east bays of arcades but canopy missing. Construction of rood
stair is said to be unusual.
Plain stone octagonal font with thick octagonal stem with broach stops and
C18 font cover in form of an ogee dome with a finial. Davidson states
(1842) that the old font "recently reduced in size". Circa mid to late C19
benches in nave, south aisle and choir. Late C19 and C20 carved wooden
reredos, communion table, altar rail, octagonal pulpit, eagle lectern, font
rails and tower screen. Charles II Royal arms over south doorway, painted
on board with shaped head.
There are no important monuments. East corridor of chancel has C20 glass
but some armorial glass was restored in 1911. 5 bells, 4 of 1775 and 1 of
1858.
Source: B F Cresswell, Notes on Devon Churches, Deanery of Woodleigh 1923.