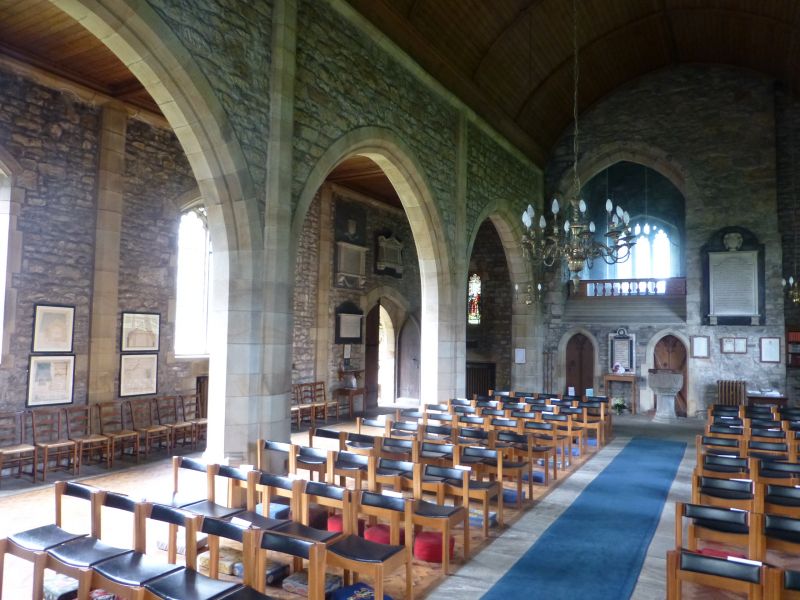 Church, 1910 by Sir Mervyn McCartney, with west tower of late C15th.
Sandstone rubble with slate roof. Comprises a west tower, a nave and
chancel under a continuous roof, a south aisle, and a south porch.
The tower has diagonal buttresses with offsets and an oversailing
embattled parapet with corner pinnacles and with 2 gargoyles on both
the north and south sides. The bell openings are of 2 cinquefoiled
lights with outer casement moulding, under a pointed head with hood.
The west window has a pointed Tudor-arched head with hood, an outer
casement moulding, and 3 cinquefoiled lights. The west door has a
pointed head, a casement moulding, and a hood. The 2 windows of the
south aisle each have 3 cinquefoiled lights under a Tudor-arched head.
The eastern bay is gabled and has a 3-light window with cusped
intersecting tracery. The inner and outer porch doors have chamfered
jambs and moulded pointed arches. The east window is of 5 cusped
lights under a Tudor-arched head.

Interior. The 3-bay arcade to the south aisle has pointed arches of 2
chamfered orders. The nave bays and the aisle bays are separated by
chamfered ashlar strips. The chancel arch is pointed and chamfered, with
further arches opening from the chancel to a north organ chamber and
south chapel. The nave and chancel have boarded barrel roofs. The
east window contains glass made by Ralph and Richard Assheton in 1869.
The octagonal sandstone font of early C16th type has sides with shields,
blank except for 2, one with the Legs of Man, the other with a chevron
between 3 fleurs de lys. Memorials to the Assheton family include a wall
tablet to Frances Annabella (d.1835) by Westmacott, with a seated figure
in relief.