A Grade I Listed Building in Helpston, City of Peterborough 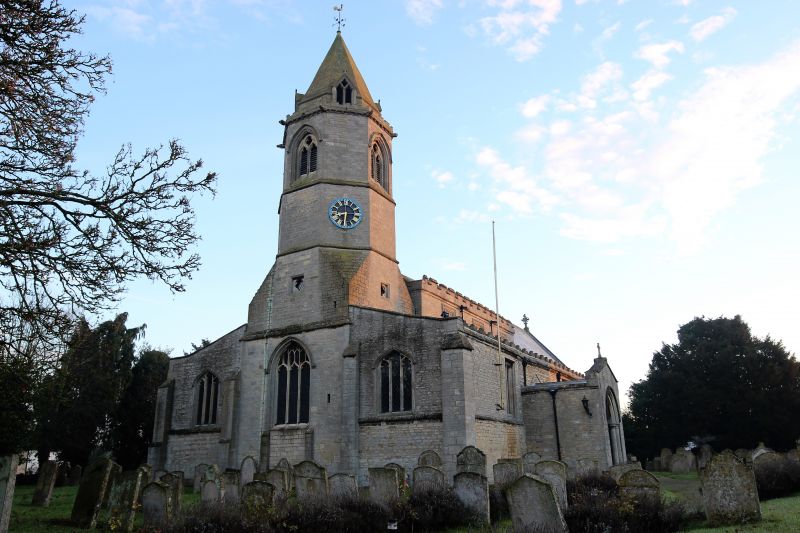 1.
5141 HELPSTON CHURCH LANE
(east side)
Church of St Botolph
TF 1205 37/281 15.12.55
I GV
2.
West tower of Norman (or Saxon) origin, remainder mainly C13.
Nave has flat-headed Perpendicular clerestorey window to south and 4-centred
arch north clerestorey windows, and battlements. North and south aisles have
straight-headed windows, Perpendicular west windows, east window of south aisle
is Decorated, early C13 south doorway with painted arch and one order of colonnettes,
one with waterleaf capital the other one with upright leaves. C14 south porch.
The door has "W.G. Fecit 1708" carved on it.
Circa 1300 chancel, but the windows have had pointed heads cut off and square
lintels substituted with initials T:G: and K.G. and date 1609 carved on them.
Restored Perpendicular east window.
West tower rebuilt in 1865, the lower parts are said to have had some long-and-short
work. Four stages, the lower 2 square on plan, the bottom stage has Perpendicular
west window, upper stages octagonal, top stage has 2-light recticulated tracery
bell openings. Small battlements with gargoyles and squat spire with large
lucarnes.
Interior: early C13 two bay south arcades with circular piers with circular
capitals and abaci, and chamfered round arches. Mid C13 north arcade with octagonal
pier and pointed double-chamfered arches. Early C12 tower arch with scallop
capitals, later pointed arch. Arches with roll-mouldings to aisles which continue
westwards to north and south of tower. Filleted shafts to chancel arch. C13
sedilia and piscina. Plain octagonal font. Arms of James I.
Churchyard has many C18 and C19 headstones including tomb of John Clare the
poet 1793-1864, with inscription "A Poet is born not made".
VCH Northants Vol II.