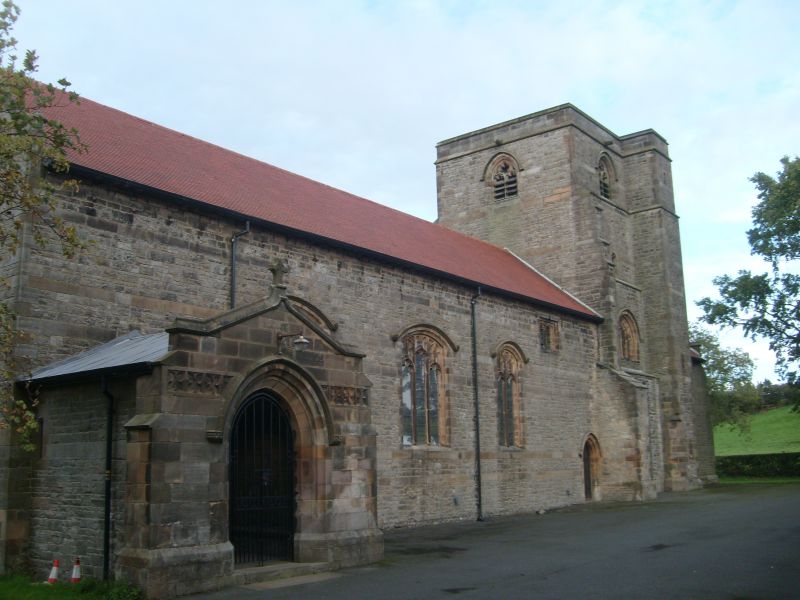 GV
II
Church, 1906-7 by Austin and Paley. Sandstone rubble with red tile roof. Comprises a nave with clearstorey on north side, a north aisle, crossing tower, north transept and vestry, and chancel.

The south wall of the nave is of three bays, having windows of three, three and two lights with segmental heads and free Perpendicular tracery. To the right is a single clerestorey window of two lights with elliptical heads. To the right again is a doorway with pointed head. To the left is the porch, with pointed arch to the doorway and a gable coping with cross finial. The north aisle windows are of two and three cusped ogee lights under flat heads. The clerestorey windows have two lights with elliptical heads under flat lintels. The tower is buttressed on the north and south sides and has a stair turret to the south. On the south side the second stage has a window with pointed head and tracery. The bell openings have two trefoiled lights and a quatrefoil under a pointed head. Above is a solid coping: the intended spire was not built. The chancel has one window to the south, of two lights with segmental head and tracery. The east window is of five lights under a pointed head with tracery.

INTERIOR: the six-bay nave arcade has pointed arches chamfered in two orders and piers alternately round and octagonal. The roof has trusses with arch-braced collars and king posts alternating with tie-beam trusses with collars, king posts with curved braces to the principals, and curved queen struts. The crossing has pointed arches with mouldings dying into round piers. The south transept was not built: behind its arch is an external wall. The chancel has a piscina with cusped head. The windows contain glass of various early C20 dates.