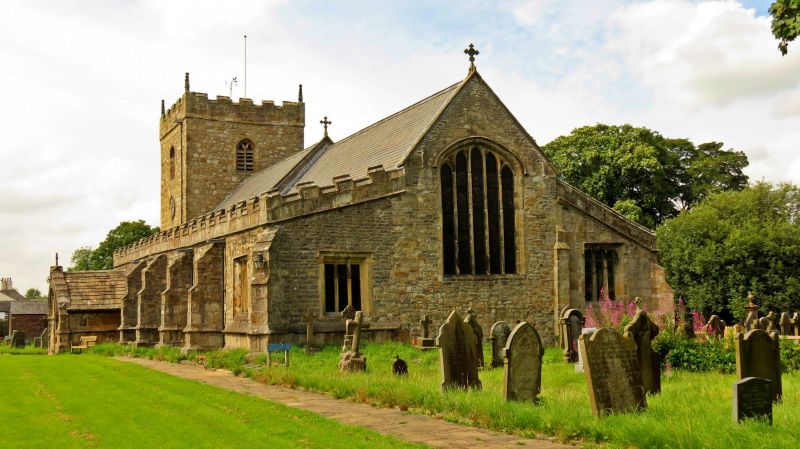 Church, probably early C16th with remains of C12th and C13th. Sandstone
rubble with slate roof. Comprises a west tower, nave, lower chancel, north
and south aisles, and south porch. The tower has no buttresses and has an
embattled parapet with corner pinnacles. The bell openings are of 2 trefoiled
lights under a pointed head. The west opening is possibly an early C19th copy.
The west door and west window appear to be C19th. The door is chamfered with
a shouldered flat head, and the window of 3 lights. The north aisle, of
large sandstone blocks, is of 5 bays and has flat-headed mullioned windows,
double hollow-chamfered with Tudor-arched heads to the lights. The south
aisle is of 5 bays with embattled parapet and mullioned windows with flat
heads. The 3rd bay has a window with chamfered surround over a priest's
door with chamfered surround, pointed head, moulded imposts, and a hood.
Both aisles have west windows of 3 pointed lights under a pointed head,
possibly C13th. Their east windows are each of 3 lights, with mullions and
flat heads. The east chancel window is of 5 lights under a Tudor-arched head
with hood. The south porch has an outer wide entrance with moulded round
arch and moulded imposts. The inner door, probably C13th, has a pointed arch
with 2 orders of sunk quadrant moulding. The porch roof has 2 short king
posts rising from collars. Interior. The nave and chancel each have 2-bay
arcades with pointed arches chamfered in 2 orders and octagonal piers with
moulded capitals. The chancel arch is similar, but springs from 2 round
piers with moulded capitals. It is flanked by 2 similar arches spanning the
aisles. The round tower arch is probably Norman. The open timber roof to
the nave is partly reconstructed, but probably late medieval. It has 3
cambered tie beams, no principals, and crown posts braced to the ties and to
the collar plate. The rafters are scissor-braced. The braces, except for those
to the western truss, are curved. In the north aisle is a marble wall tablet,
erected in 1706 to Sir John Assheton, with composite columns and broken
segmental pediment. The chancel screen contains some C16th woodwork. The
glass in the east window was renewed in 1872, when fragments of medieval
glass from the earlier window were transferred to windows in the north and
south chapels.