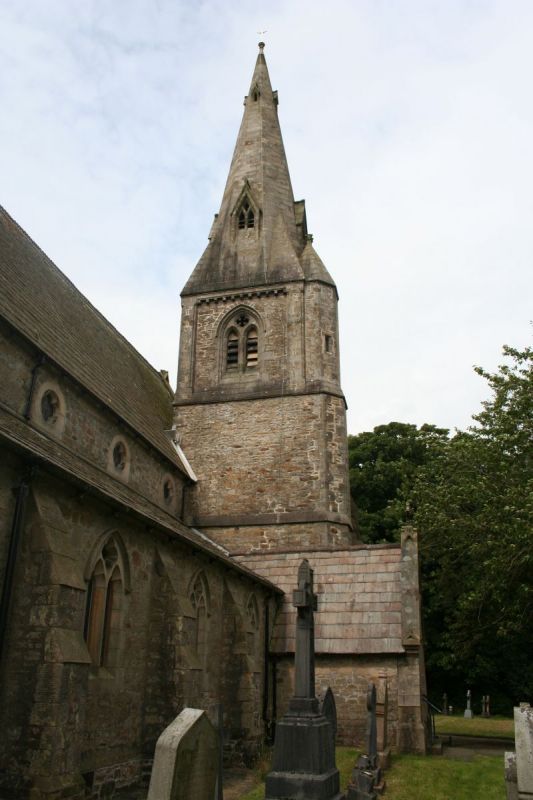 GV II
Roman Catholic church, 1847-8 by Charles Hansom. Sandstone rubble with slate
roof. Built with chancel at south, but for purposes of this description
assumed to be conventionally oriented. Comprises a nave, lower chancel, north
and south aisles, a tower with stone spire at west end of north side of nave,
and a north porch. 3-stage tower has semi-octagonal stair turret, and
weathered offsets. The bell openings are within sunken panels with corbel
tables over, and are of 2 pointed lights with a quatrefoil under a pointed
head. The octagonal spire has 2 stages of lucarnes. The west wall has a
window of 3 trefoiled lights under a pointed head, and a similar window to the
south aisle. The west doorway is moulded with a pointed head. The north side
has 5 aisle bays separated by buttresses. The windows are of 2 cusped lights
with quatrefoil under a pointed head. The nave clearstorey has 5 quatrefoiled
windows. To the east of the aisle is one bay of the chancel. At the west
side of the aisle is a gabled porch with moulded pointed arch, and a statue
niche over. On the south side are 6 clearstorey windows and 5 aisle windows.
To the right of the 1st window is a moulded doorway with pointed head and
shallow stone porch. The east window is of 4 trefoiled lights under a pointed
head with Y-tracery and 3 large quatrefoils. Interior has west galley with
organ and with a timber front carried on 3 stone arches. The nave arcades are
of 5 bays with pointed arches, chamfered in 2 orders, and have round piers.
Above the pointed chancel arch is a wall painting of the last judgement.
Below is a screen of tracery supporting a rood. The open timber roof has
scissor-braced rafters and no trusses. The chancel has a piscina and triple
sedilia, and a reredos flanked by carved figures. The roof has painted timber
panels. A north chapel has stencil decoration. The windows contain stained
glass of various late C19th dates.