A Grade I Listed Building in Gressingham, Lancashire 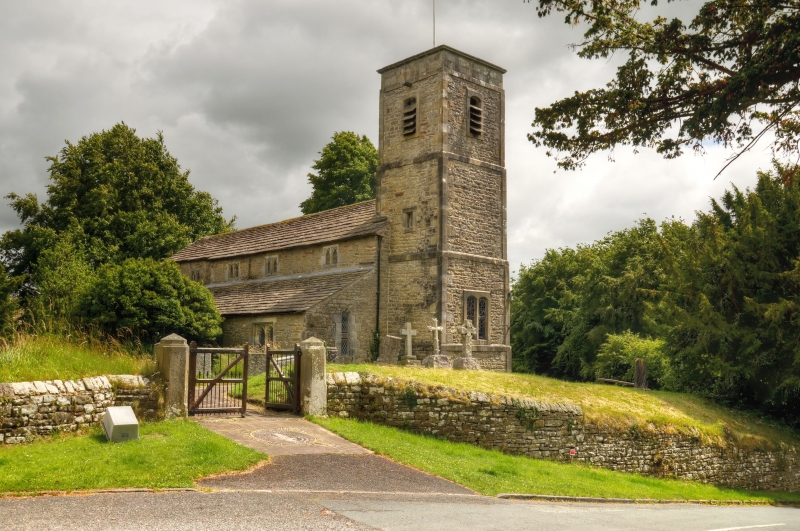 Church, Perpendicular with C12th remains, partly rebuilt 1734, restored
1862 by Paley. Sandstone rubble with stone slate roof. Comprises a west
tower, a nave and chancel under a continuous roof, and a north aisle and
clearstorey. The tower, of 1734, is of 3 stages and has clasping pilaster
strips and a solid parapet with moulded coping. Above a plinth and above
each stage is a band with offset. The bell openings have plain stone
surrounds with segmental heads. The lower stage has a west window of 2
segmental-headed lights with a flat-faced mullion and a stone surround
with slight hollow chamfer. The south nave wall is of 3 bays, with a
buttress between nave and chancel. The windows, of 1862, have pointed
heads with hoods, and 2 cusped lights with tracery. At the left is a
Norman doorway with jambs moulded in 3 orders, imposts, and moulded arch,
the outer order having a chevron design and the middle one ropework. The
east window is of 3 cusped lights under a pointed head with Perpendicular
tracery. The north aisle has 2 bays to the chancel and 3 to the nave,
each with a window of 2 cusped lights under a flat head. The clearstorey
windows are of 2 trefoiled lights under a flat head. Attached to the wall
of the north aisle is a tablet in memory of Madeline Bluecher, Graefin
Wahlstadt Dallas, with a German inscription arranged around a foliated
cross in a foliated surround. lnterior. The tower arch has a cyma-moulded
tone- surround with round arch and moulded imposts. The nave arcade is of
3 bays, chamfered in 3 orders with pointed arches and octagonal piers with
moulded capitals. The chancel arch appears to be C19th and is pointed with
one chamfered and one hollow-chamfered order. On the north side of the
chancel, with a pointed arch to both aisle and chancel, is a small chapel
now containinga tomb chest in a Gothic style erected by the widow of
George Marton of Capernwray Hall (d.1867). The nave roof has 5 trusses
with tie beams and high curved collars. The 2 trusses to the chancel are
similar. In the chancel is a wall tablet to the Nelson family (d.1830, 31
& 37) by Websters of Kendal in a Greek style. The communion rails have
turned balusters.of C18th type. The outer pews are of raised and fielded
panelling and have doors. The pulpit, re-set on a stone base, has raised
and fielded panels and an attached plaque inscribed: 'RT 1714'. The east
window, and a window in the north aisle, contain glass said to be late
work by Morris & Co. (Pevsner).