A Grade I Listed Building in Whalley, Lancashire 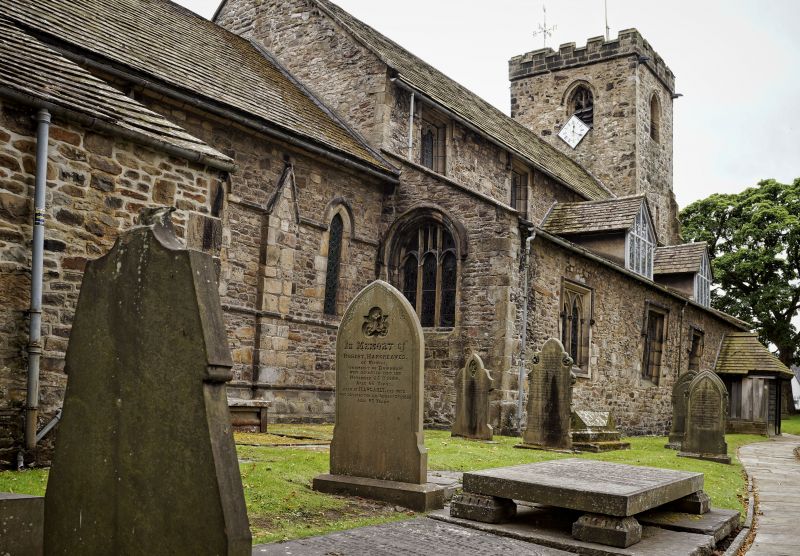 Church of England Parish: Whalley St Mary and All Saints

Church, C13 with tower added and windows altered later C15. Sandstone
rubble with stone slate roofs. Comprises a west tower, a nave with
clearstorey and north and south aisles, a lower chancel, a south porch, a
north vestry, and a timber north porch added in 1909. The west tower has
angle buttresses and an embattled parapet. The bell openings are of 2
trefoiled lights with tracery and hoods. The west window is of 3 trefoiled
lights under a pointed head with Perpendicular tracery. Below is a moulded
doorway with pointed arch. The south aisle has one bay to the west of the
porch and 2 to the east. The windows are of 3 lights with rounded heads
under a flat head with hood. The 4 clearstorey windows are of 2
cinquefoiled lights. The south porch was rebuilt in 1844 and has a moulded
pointed outer doorway. The inner doorway has a moulded pointed arch, and
late C12 capitals for angle shafts which are now missing. 2 of the north
aisle windows, of 3 and 2 lights, are similar to those to the south. The
3rd, eastern, one is C19 with 2 trefoiled lights. The chancel windows are
chamfered lancets, with a drip course rising over each light and with a
string course at sill level. On the south side are 5 windows, on the north
side 3. On the south side are 3 buttresses with gablets, on the north side
2. To the right of the left-hand southern window is a priest's doorway.
The east window is of 5 cinquefoiled lights under a pointed head with
Perpendicular tracery. Interior has 4-bay arcades with octagonal piers on
the south and round ones to the north. The arches are pointed and
chamfered in 2 orders. The nave roof, possibly of c.1500, has moulded
cambered tie beams, and king posts rising from high collars. Between tie
and collar are thin vertical members with traceried heads. Intermediate
principals have no ties, but high arch-braced collars with king posts. The
chancel roof has high arch-braced collars with king posts. The lower
purlins have large curved wind braces. The chancel arch is pointed, of 2
rounded orders with moulded imposts and responds. The triple sedilia have
pointed arches springing from round shafts with moulded caps and bases.
Adjoining these to the east are a piscina and credence table, the latter
with trefoiled head. Among the wall tablets is a memorial to
Dr.T.D.Whitaker (died 1822). The east window has glass inserted in 1816
depicting shields of arms of local families. The east window of the south
aisle was designed by Augustus Welby Northmore Pugin in 1847. The interior contains a large quantity of early woodwork. The C18 west gallery was reconstructed in 1909 and carries an organ with a case made in 1729 for Lancaster church. The pews, although re-arranged, are mostly C17 with shaped tops to the bench ends. At the west end of the north aisle are the churchwardens' pew and
the constable's pew (dated 1714), both moved to their present positions in
the C20. At the east end of the nave, on the south side, is St.Anton's
cage, with elaborately carved woodwork and dates '1697' and '1830', the
latter dating a restoration when 2 doors were substituted for one. The
cage incorporates earlier dated panels. To its east is the 'medieval pew'
with a front of carved tracery decoration. To the north is the Starkie
pew, dated 1702. The north and south chapels have screens which are partly
medieval. The chancel screen is a C15 rood screen which was restored in
1864. The 22 choir stalls are dated by the initials 'W.W.' to between 1418
and 1434. They were extensively restored in 1866 and have elaborate carved
canopies and a very fine series of misericords.