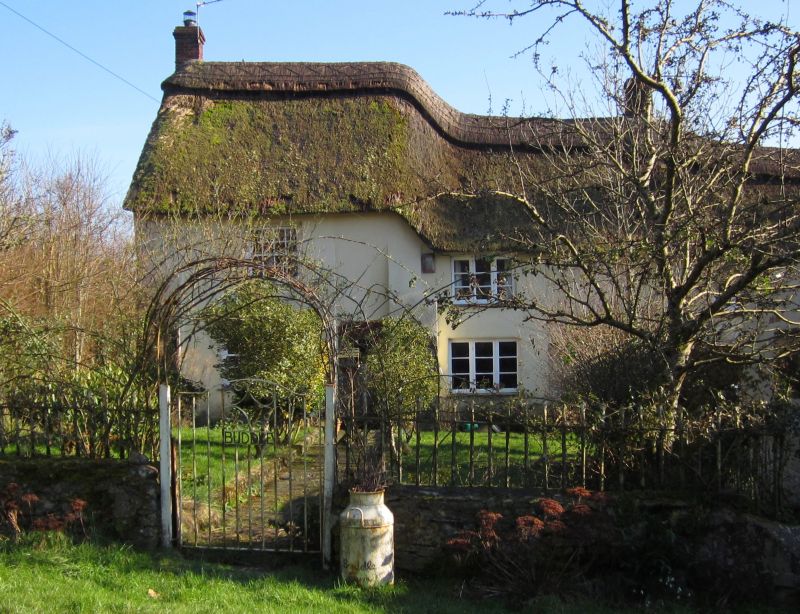 BROADWOODWIDGER
SX 48 NW
8/26 Buddle
2.12.80
GV II
House. Medieval core, C17 remodelling, C20 renovations. Colourwashed rendered cob
and stone rubble, thatched roof gabled at left end, half-hipped at right end, left
end stack with brick chimney shaft, axial stack with brick shaft.
Thorough C20 renovations revealed a complex building history. A small medieval open
hall house possibly with an adjoining shippon was extended at the higher end by an
inner room with its own open hearth. The higher end was ceiled over, the stack
inserted and the shippon rebuilt in the C17. Rear outshuts to the inner room and
hall may be C18 or C19. A probably C19 passage and stair inserted in the higher end
were removed during thorough C20 renovations which have left a 3 room and through
passage house with the hall heated from a stack backing on to the passage and the
lower end an unheated out building. A C20 stair has been inserted in the rear left
outshut and the outshut to the hall has been converted to a kitchen. 2 storeys. 3-
window front, the thatch swept down between the higher inner room and the lower hall,
and again between the hall and the through passage and lower end at the right. Late
C20 timber front door to the passage, further entrance, flanked by buttresses,
directly into the inner room at the left. Sympathetic late C20 fenestration with 16-
pane sashes to the left, 1 to the ground floor, 1 to the first floor; 3-light
casements with 3 panes per light in the centre, 1 to the ground floor, 1 to the first
floor and one 3-light casement, 2 panes per light above the passage door. The
outbuilding has an entrance on the front and a loading door to the loft. The thatch
is carried down as a catslide roof to the rear outshuts.
Interior The hall fireplace has ashlar granite jambs and a replaced timber lintel.
The cross beam is said to be original, the exposed joists are late C20 replacements.
The inner room fireplace has an ovolo-moulded stopped timber lintel on rebuilt jambs
and exposed joists of large scantling. The through passage has thin exposed joists.
1 curved foot roof truss visible over hall has a collar lap dovetailed into the
principal rafters, apex of truss not inspected but said to be E-apex (Alcock) and
heavily smoke-blackened. Roofspace above inner room not inspected but smoke-
blackened timbers said to survive. The roof trusses in the lower end have been
replaced in the late C20 renovations, the wall between the lower end and the passage
consists of a stone wall with a timber partition above. The right gable end wall of
the lower end was rebuilt during the late C20 renovations reusing old cob which was
remixed and erected with shuttering. A house with a long building history including
evidence of a 2 phase medieval development unusual in this area of Devon.