A Grade I Listed Building in Coleby, Lincolnshire 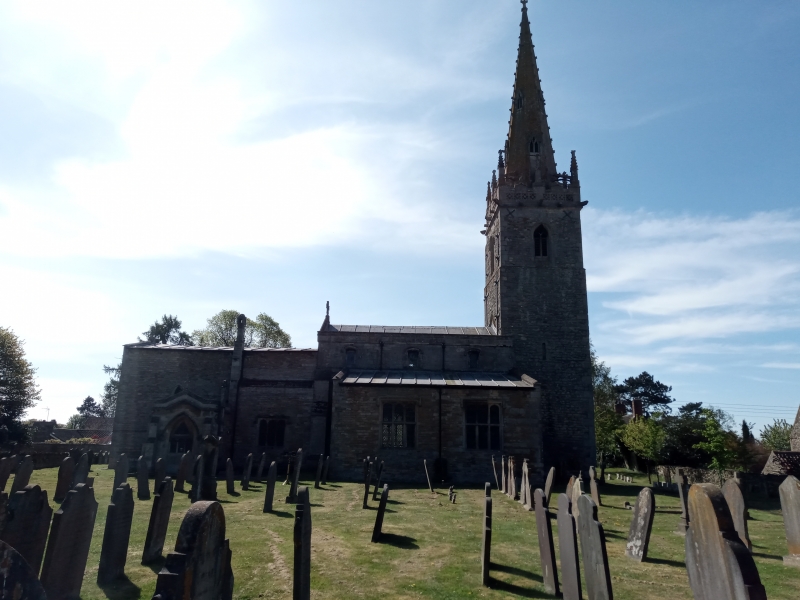 Parish church. C11, C13, C14, C15 and C19. Coursed rubble with ashlar dressings and
leaded roofs. West tower Saxon with later C11 bell chamber and C15 bell openings,
battlements pinnacles and spire. Two small C11 openings, though west door and windows
C15. Nave, has three C15 clerestorey windows with a parapet above. The north aisle
has 2 rectangular C15 transom and mullioned windows with carved hood-mould stops. The
chancel is C13, with lancets, 3 stepped to the east, a finely carved corbel table and
a small C19 vestry. The south aisle is also C13, with an originally 2-storey porch to
the west. This porch protects a very fine C11 doorway, with 2 orders of shafts,
capitals with leaf decoration, outer arch with lozenge-chains and inner with a roll.
Internally the tower arch is C11 but with a C15 arch fitted in to strengthen it. The
north arcade has 2 bays, round-arched with a sturdy pier with scalloped capital and
square abacus, billet in the hood-mould. The south arcade has C13 arches with stiff
leaf capitals and double chamfered arches. The chancel arch is pointed but with the
late Norman square abacus. The chancel itself is C13, originally with a C13 north
transept chapel and a C14 south one, but only the arches to these survive. The
piscina is C13, and so is the double sedilia though the hoodmoulds were renewed in the
C19. The font is Cll with interlocking arches. The pews were fitted in the C19, they
were brought from Hackthorn Church, they have fine carved poppy heads. Wall monument
1734. Church restored carefully by F C Penrose in 1864, and Tower restored 1901.