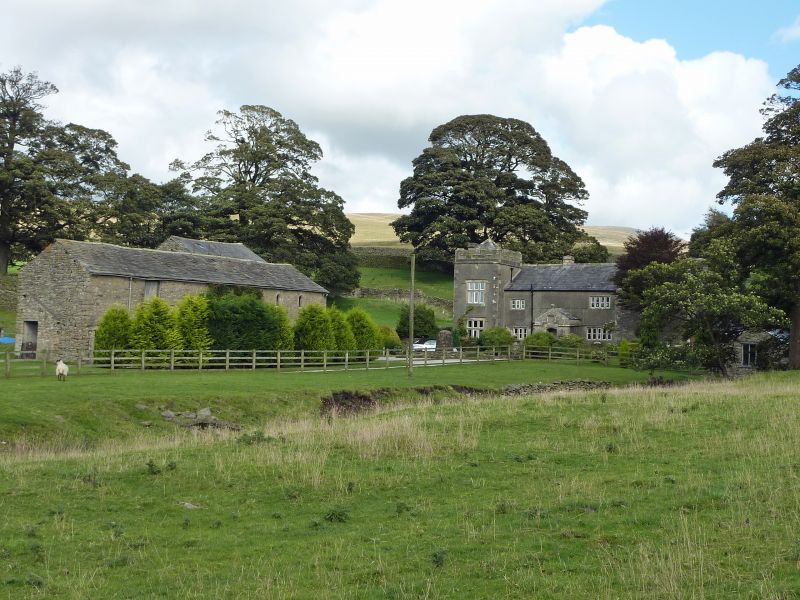 House, 1687 and possibly early C17th, with mid C19th additions and
alterations. Pebbledashed rubble with slate roof.2 storeys. Facade has
central section of 2 bays, with a one-bay cross-wing to the right and a
one-bay C19th tower at the left. Between the 2 central bays is a
single-storey gabled porch. The window are rebated and chamfered with
mullions. To the left of the porch are ones of 4 lights and one light. To
the right is one of 5 lights. On the 1st floor the windows are of 3 and 4
lights. A drip course over the ground floor continues around the porch.
The cross-wing has a one-light ground-floor window and a 2-light 1st floor
window. The tower, with a pyramid roof behind an embattled parapet, has
6-light chamfered mullioned and transomed windows. The porch has an outer
chamfered doorway with restored Tudor-arched head. Above is a re-cut
plaque inscribed 'CM 1687'. The inner doorway is moulded. Inside, the
floor has been removed from the central room in the C19th, forming an open
hall with gallery. Its left-hand wall has a wide cyma-moulded fireplace
with segmental arch and with masons' marks on the voussoirs. It is flanked
by moulded doorway with basket arches. The open roof has a central truss
of late Cl7th type, with a tie beam, raking queen struts, and a short king
post rising from a high collar, braced to the ridge. The right-hand wall
has the Tudor-arched head of a blocked fireplace at the former 1st floor
level, now supported on corbels. A moulded doorway similar to those in the
left-hand wall leads into the cross wing. Around 3 walls are C17th fixed
panelled benches. Behind the tower, towards the left of the house, is a
dog-leg stair with closed string, turned balusters, and moulded handrail.
Underneath the 2nd flight is a board, now painted black but with lettering
visible in relief which shows that it was originally a toll board. The
cross-wing has ceiling beams with deep chamfers of early C17th type, and a
straight flight of stone steps with C17th turned balusters and handrail.
In the rear wall is a wide fireplace with chamfered jambs, moulded
imposts, and a cyma-moulded segmental arch with keystone.