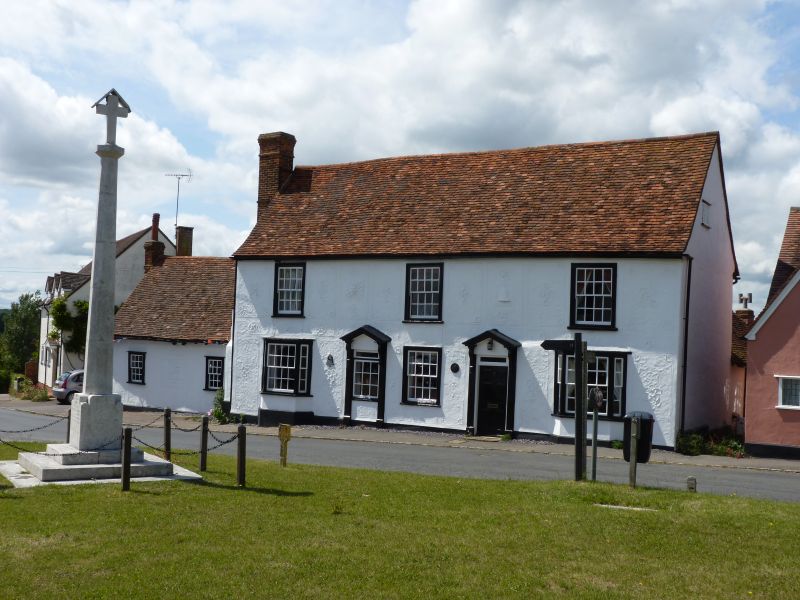 Church of England Parish: Broxted with Chickney and Tilty and Great and Little Easton

2.
Former Public House, c 1500, two storey, timber framed and plastered house. Roofs
are gabled in peg tile with 1½ storey gabled brewhouse extension on west end and long,
hipped rear extension in clay peg tiles with lean-to at end. Rear elevation has two
stages of outshots and open porch. Front elevation has, on the first floor, 3 double
hung sashes with small panes. The ground floor has a central d.h.s. with small panes,
open pedimented, late C18 doorcases, either side and a pair of canted bay windows with
small panes. The western doorcase is infilled with a modern window. Gable end red
brick stack at west end. Formerly a two storey, long-wall jetty house now underbuilt.
One bay was later partially removed and substituted by a c 1600 cross-wing. The
eastern end was the service end and traces remain of the buttery/pantry subdivision.
The existing front door gives access to the hall and the original muntin and rail
'screen' has been moved to form an internal passage. This retains a part of the
original hall door opening with an ogee and hollow chamfer on the jamb. Part of rear
outshot includes a stair tower with a, partly original, newel stair. The roof is a
remarkable side-purlin/windbrace design, with raised collar over upper chamber,
expanded rafter heads and V struts at the solar end. Floor joists have soffit tenons.
Cast iron yard pump at rear.