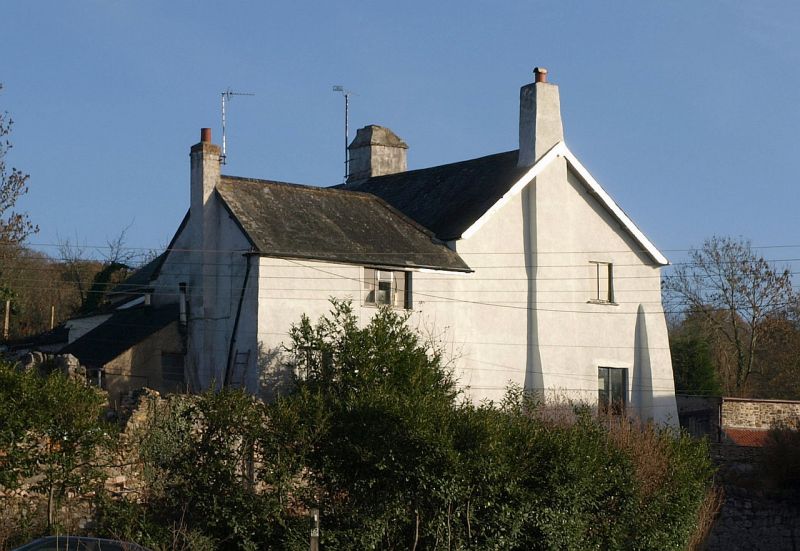 Farmhouse. Early C15 or possibly earlier origins, circa mid C16 rear wing, C17
remodelling including addition of porch and probably of rear stair wing. Roughcast
stone; slate roof, gabled at ends; left end stacks, axial stack.
The original plan was a medieval open hall house of high status: the design of the
roof, with intermediate trusses is evidence both of the quality of the medieval
building and its early date. The medieval roof does not extend the entire length of
the present main range but concludes at the left end with a closed truss (infill
removed). The extreme left end of the main range has been re-roofed and may have
been rebuilt, thus the lower end arrangement of the medieval house is not clear but
the closed truss indicates that it was unheated. A rear left wing at right angles to
the lower end is a 2-storey C16 solar wing, it was not clear at the time of survey
(1986) whether this wing had ever been heated. The flooring of the hall may have
taken place as late as the C17, with an axial hall stack inserted backing on to a
through passage, but was probably prior to the addition of a 2-storey porch and a
rear stair wing opposed to the porch. The plan as it was at the end of the C17 is
largely intact: 2 rooms and a through passage; 2 storey porch; rear stair wing and
rear left solar wing. There have been some subsequent additions at the rear.
2 storeys. 1:1:1 window front with an approximately central 2-storey gabled porch
with 2-centred arch outer doorway and a canted timber cornice of an oriel which has
been removed. Modern casement windows throughout, the ground floor windows recent
plastic replacements. The left end wall is buttressed and the ground falls away at
that end.
Interior The medieval hall roof exists below a later roof and has been truncated
above collar level. Nevertheless, it is an outstanding survival. The feet of the
principal rafters are plastered over in the upstairs rooms and the possibility that
they may be base crucks should not be discounted. There are 7 smoke-blackened
trusses, very closely-spaced (about 65"), alternating between conventional arch
braced trusses of massive scantling with cranked collars and butt purlins, and
intermediate trusses which are also arch braced but with the rafters collars
oversailing the principal rafters. Originally there was some form of superstructure
above the collars of the intermediate trusses as the top edge of each collar has 4
mortices (2 to the left and 2 to the right of the collar apex). The right hand truss
(at the higher end of the hall) has plain arch braces and is not sooted on the right
side. The subsequent trusses have chamfered arch braces. 1 wind brace survives.
The extreme left hand truss appears to have been a closed truss and is sooted on the
right hand side only. It is different in design from the others with the principal
rafters jointed into the soffit of a straight collar, straight braces between the
rafters and collar and 3 pegholes on the collar soffit, presumably for infilling
which no longer exists. This is an exceptionally important medieval roof.
The solar wing has a roof of jointed cruck construction, apex not inspected. The C17
hall is surprisingly plain. The axial beam is moulded on the front side and
chamfered to the rear wall, C20 grate possibly concealing an earlier fireplace. The
lower end has a massive blocked fireplace of uncertain date and is paved with local
limestone. The ground floor of the solar wing has deeply-chamfered cross beams with
step stops; a deep cupboard in the thickness of the party wall with the lower end
room may indicate the position of a former stack or stair, possibly a rear lateral
stack to the lower end, later replaced by the present gable end stack. The C17 porch
has a moulded plaster cornice and stone corbels; the room over the porch has a
splendid enriched rib coved plaster ceiling(Period Two, French) with small pendants
at the intersections of the geometric design, floral sprays and a frieze of gryphons.
The design and the workmanship are sophisticated.
The framed stair has oak treads and C18 plain, rectangular section balusters.
The house is sited high above the farmyard, gable end to the road with a flight of
semi-circular stone steps leading up to the garden gate. The steps are included in
the listing.
Bellamarsh Barton is recorded in 1242 as Beldemerse (Harris). A large mill was
formerly associated with the house and was the scene of bread riots during the
Napoleonic wars. Thomas Campion, a blacksmith from Ilsington was deemed to have
been the leader of the riot and his execution, said to have taken place at Bellamarsh
in 1795 was the last public hanging in the country. The mill has been demolished
since 1952.
Notable plasterwork and an exeptional roof make Bellamarsh Barton a house of
outstanding importance.