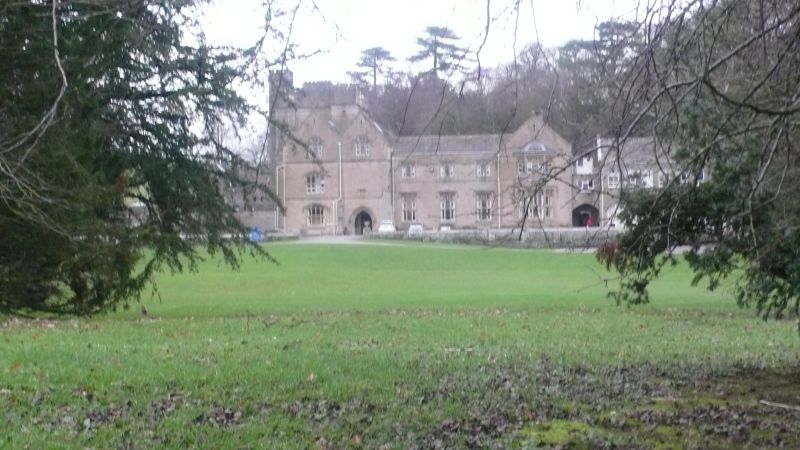 School, formerly country house, said to be c1868 by Paley on site of
earlier house, but present house appears to be of more than one build.
Sandstone rubble, with roofs mainly of stone slate. South facade has
3-storey 2-bay section at the left, with a gable over each bay. The
left-hand bay has 8-light mullioned and transomed windows with Tudor-
arched heads on the ground and 1st floors. The 2nd floor window is
stepped, with 3 lights and with tracery above the central light. The bay
adjoining to the right has a similar window. Its 1st floor is blank apart
from a carved coat of arms. Below is a moulded doorway with pointed arch.
To the right are 3 bays which have windows with flat heads and
Perpendicular tracery: of 6 lights with transoms on the ground floor and
of 3 lights above. To the right is a gabled cross-wing which has a
2-storey canted bay window with similar details. The range adjoining to
the right was moved from the stable court in the mid C20th. Behind the
left-hand part of the facade a taller tower with corner turret and
embattled parapet is visible. At the left are the buildings forming the
front of the stable court. A single-storey gabled building has 2 adjacent
cross windows with flat traceried heads. To its right a wall linking it
with the main house has a 2-light window with similar head. To the left is
a 2-bay link to the gatehouse, which is of 2 storeys with an embattled
parapet and corner turret. On the 1st floor it has an oriel window of
semi-circular plan. The-doorway is moulded with pointed arch. Inside, the
entrance hall has a glazed Gothic screen. The dog-leg stair octagonal
newels with moulded caps, and barley sugar balusters. The stair hall has a
hammer-beam roof and is lit by a stained-glass window of 3 ogee lights
with tracery under a pointed head.