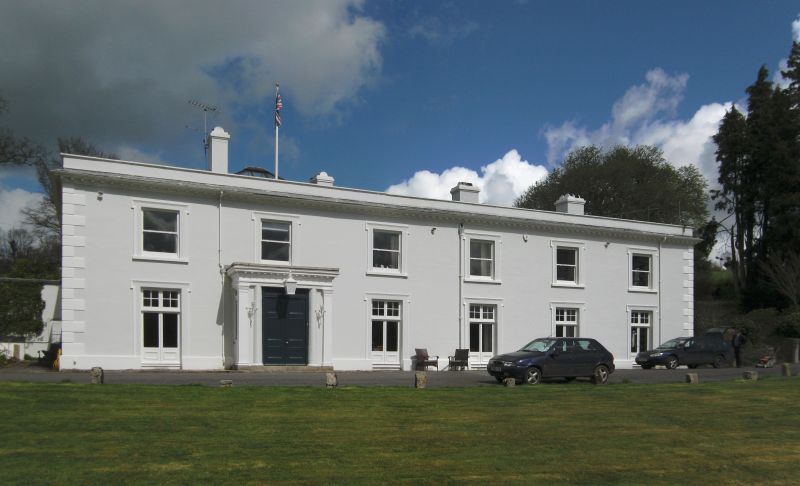 Country house. Circa mid C19. Internal plan altered in [ate C20. Stuccoed walls with rusticated quoins. Shallow pitched hipped slate roof behind plain parapet with modillion cornice. Numerous rendered brick stacks to main block and rear wings.
Plan of central block with a rear wing at either end. The internal room arrangement has been somewhat altered by the conversion of the house in the late C20 into a home for the elderly. However its basic form appears to have consisted of a stairhall to the left of the main block with a principal room to its left which extended back along the garden front to the left, and a small room immediately to the right of the stairhall and beyond that another large reception room. The 2 rear wings presumably housed the service rooms and servant's accommodation, the right-hand wing contains a secondary staircase.
2 storeys. Symmetrical 6-window front except that the porch is in the second bay from the left-hand end. IstfloorwindowsareCl9horned2-panesasheswithoutglazingbars. On the ground floor are C19 French windows. All are in eared architraves. EnclosedcircamidCl9porchhaspilasterswith- moulded capitals at each corner and 2 plain pillars on the front either side of Cl9 6-panel double door; the porch has an entablature with a plain frieze with modillion cornice. The right-hand front is of 3 windows which are similar to those on the lst floor of the main block, the 2 right-hand windows have 12 panes. The service wing projects at the rear. The left-hand front overlooks the garden and has a similar 3-window front. The 2 rear wings form a courtyard.
Interior: The entrance hall and large lst floor landing retain their original plaster modillion cornices. The stairs have square chamfered and stopped newels with finials. Open string with carved tread- ends. The balusters are paired on each step and are of barleytwist and spiral on vase design. Leading
From the hall at the rear are 3 roundheaded arches with panelled responds. The 2 large rooms also have decorative cornices, that to the right-hand room is more elaborate and it also has a ceiling rose.