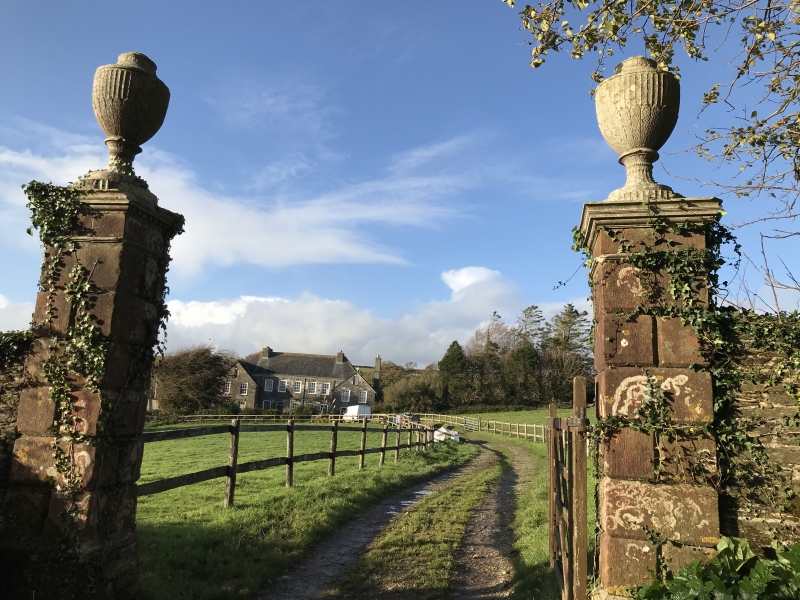 Farmhouse. Dated 1726, possibly a remodelling or rebuilding of 1726 of an
earlier house. Dressed stone rubble. Slate hipped roof projecting lateral
stacks at the sides of crosswings the left hand trucated, the right hand
with tall rendered shaft, large rendered gable-end stack to rear wing.
Plan and Development: Probably a remodelling in 1726 of an earlier house.
the central range, with an entrance hall to the left, a stair tower behind
and a large room to the right appears to have been rebuilt but the lower
cross-wings at either end might derive from an earlier house. The cross-
wings have lateral stacks at the sides and single storey wings behind the
left hand rear wing unheated and the right had rear wing with a large gable-
end stack. At the back of the central range in the right hand angle of the
stair tower there is another tower-like projection to the right of which is
a single storey outshut. An interior inspection would have allowed a more
detailed analysis of the plan.
Exterior: 2 storeys and attic. 2:5:2 bay south front symmetrical but for
the doorway to left of centre. The latter 5 bay central range has a hipped
roof with wooden modillion eaves cornice, string at first floor level and
red sandstone keyblocks to segmented window arches bearing date 1726;
doorway to left of centre with fanlight, similar arch and keystone and later
panelled door; over the doorway a carved slate plaque with coat of arms.
All the windows are circa early C19 12-pane sashes in C18 revealed cases.
Similar windows in projecting gable-ended cross-wings to right and left and
small narrow 8-pane attic sashes in gables. The right and left sides of
cross-wings have projecting lateral stacks and sashes with glazing bars.
The rear elevation is gabled to right and left and to right of centre a
hipped roof stair tower with a large circa early C19 12-pane sash. In angle
to left of stair tower another hipped roof projection with a 12-pane sash.
Flanking right and left are single storey wings that on right has a hipped
roof and the wing on right has a large rendered gable-end stack.
Interior: Not accessible at time of survey 1988/89 but panelled window
shutters and soffits were observed at the front and there is a good open-
well, open-string staircase with moulded balusters, moulded handrail ramped
up to newel and wreathed over curtail and carved tread ends.
"Fuge (now a farmhouse) was built in 1725 by the late C. Hayne Esq."
(White's Directory)
Strete was formerly in the parish of Blackawton and "after the dissolution
of the manor of Blackawton came into the possession of the Russells who in
1618 sold it to the Roopes of Dartmouth. They (the Roopes) owned Fuge".
(Cresswell).
Sources: B.F. Cresswell, Notes on Devon Churches, Blackwater, Deanery of
Woodleigh 1923, Whites Directory (Blackawton) 1850.