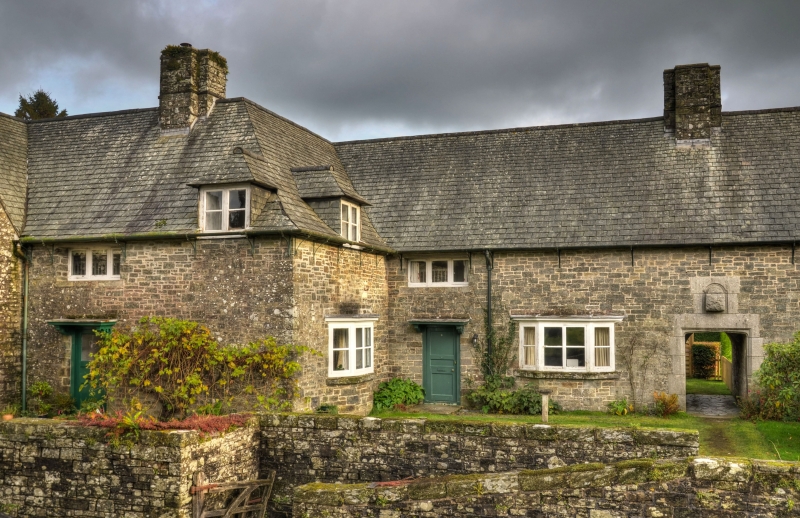 6 adjoining estate village cottages, 1 with a shop front and the wall forming the
courtyard to the west. Designed in 1909 by Sir Edwin Lutyens for the Duke of Bedford
and forming part of the planned village centre of Milton Abbot. Local stone rubble
with slate roofs hipped and gabled at ends, the eaves swept down over corbelled eaves
cornices. The slates are laid in diminishing courses. Short stone stacks on ridge,
1 projecting lateral stack to the south wing. Vernacular revival. The group forms
an approximate U plan on a raised site to the east of the churchyard, with a front
courtyard formed by a retaining wall between the north and south front wings. An
archway between nos 5 and 6 in the centre of the middle block leads to the rear,
suggestive of a group of almshouses. 1 storeys and attic, the south wing partly 2
storey and attic. The middle block has a long irregular 6-window front elevation
with a large central granite archway with ashlar granite jambs below a projecting
block of unworked granite probably intended for armorial bearings. The north wing
consists of 2 staggered blocks, the outer block, nos 3 and 4, has a roof hipped at
the left end and gabled to the courtyard. The roof of the inner block is hipped to
the courtyard. The roof of the south wing is hipped to the front, and the south wing
is 1 storey and attic to the courtyard side but 2 storey and attic to the rear and
the west end which has a shop front with a bay window on to the pavement supported on
turned wooden balusters. Consciously irregularly grouped fenestration. The ground
floor windows are all either canted bays with 2-light casements with glazing bars or
similar 2-light casements with deep reveals and flat stone arches. The first floor
windows are either 2- and 3-pane casements with deep reveals or full gable dormers
with hipped slate roofs and slate-hung returns with 2-light casements with glazing
bars. Half-glazed front doors under flat canopies supported on moulded pierced
timber brackets. The shop window has 24 panes to the front and 4 to each return. A
stack on the south side has a gabled set-off, a slit in the front return and a small
window at the base. Fenestration to the rear of the middle block is intact with 2
oriel windows with slate-hanging below. The stone rubble retaining wall forming the
west boundary of the courtyard creates a baffle entry with steps into the courtyard.
A timber gate is probably a copy of the original Lutyens design.