A Grade I Listed Building in Northorpe, Lincolnshire 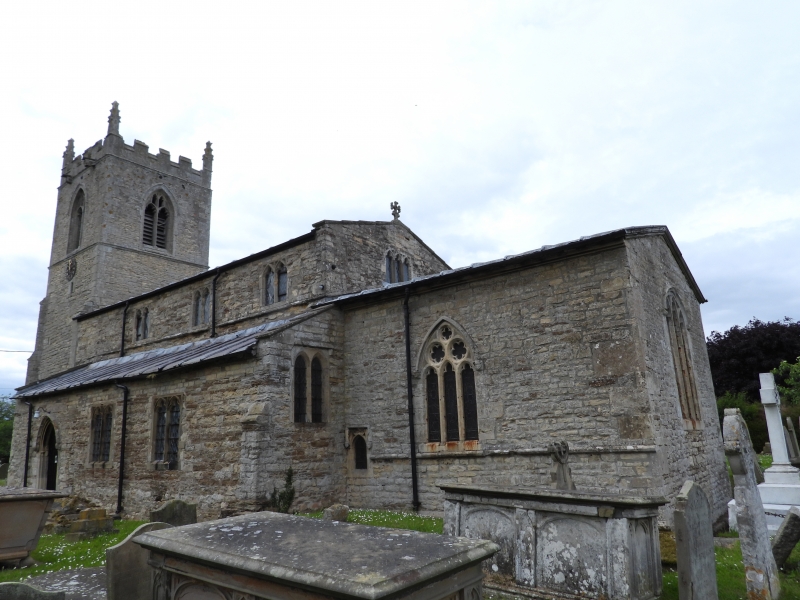 Parish Church. C12, C13, C14, C15, C16, C19, 1905. Coursed
limestone rubble, ashlar, lead roofs. West tower, nave,
chancel, north and south aisles. C16 2 stage tower has plinth
with chamfered moulding, moulded string course, moulded parapet
string course with 2 grotesque chutes to north and south only.
Embattled parapet with corner pinnacles; it has angled corner
buttresses to first stage only. South side has 2 narrow stair
lights and an openwork clock beneath belfry level. The western
face has a low doorway with a semi circular headformed in a
massive stone lintel, with chamfered jambs. Over the door,
slightly offset to the left, is a 3 light C16 window with panel
tracery, hood mould with label stops and concave moulded jambs.
The belfry lights to each face have 2 louvred openings with
cusped heads, panel tracery over and a plain moulded hood mould.
On the north side, where the tower butts up to the nave, half a
blocked pointed arcade arch can be seen to have been cut by the
addition of the tower. The existing north aisle, which is
shorter than the nave by one half bay, has two 2 light C19
trefoil headed windows. The clerestorey has two 31ight C16,
trefoil headed windows with flat heads with much Cl9 restoration.
The north wall of the chancel has a C19 roll moulded sill string
course and a moulded eaves course. There is a small blocked
doorway with hood mould and human mask label stops and a 3 light
early C14 window with geometric tracery having a C19 hood mould
with human mask label stops. The C16 east window has 3 lights
with trefoil heads under a very flat 4 centred arch. On the
south side is a 3 light window similar to that on the north and
at a lower level in the angle between the chancel and the south
aisle a small single light which has been cut down and a square
hood mould with human mask stops inserted over the top of it.
The aisle roof has been lowered. The east window of the south
aisle has 2 pointed lights under a flat hood mould. Lower part
in ironstone and limestone banded work. The south face which has
2 two light C19 windows with trefoil heads and a fine C14 door
with traceried woodwork in the side panels and head, the middle
of the door is C19. The doorway has slender engaged shafts with
octagonal capitals and moulded head. The hollow moulded hood
mould has fleurons on the underside and terminates in human head
label stops. In the west wall of the aisle is a single trefoil
headed light with sunken spandrels. The blocked cut arcade is
visible on this side as on the north. At the east end of the
nave is a 3 light trefoil headed window at a high level. Inside
are 3 bay north and south arcades, late C12, with circular piers
and square bases and abaci and single plain arches. The capitals
and responds are decorated with scallops and on the south side a
leaf pattern. To the west are half bays of early C13 character
with simply moulded chamfered imposts and hood moulds. The tower
arch springs from corbels in the form of engaged octagons with
human heads having a double chamfered pointed arch. The south
aisle has a triangular headed stoup east of the south door and a
cut back triangular headed piscina at the east end. The columns
all have chases down their sides from former box pews. The C15
nave roof restored c.1905, retains extensive C15 fabric
consisting of moulded tie beams, purlins, principal rafters and
ridge having 4 original decorated roof bosses and C20 bosses at
the intersections. The wall plate is brattished with battlements
and has fleurons and other designs on its underside. The south
aisle has 3 tie beams. The C13 chancel arch has engaged
octagonal responds with curling corbels, and is double chamfered.
On the south side are traces of an earlier chancel arch. Also on
the south side is a piscina with an early quadrapartite pierced
base and C19 trefoil head. On the north side is a triangular
headed aumbry and further west a blocked doorway with timber
lintel. The chancel roof is of 2 bays with a canted moulded tie
beam and moulded rafters and purlins. Decorative bosses at the
intersections, one displaying a coat of arms. The wall plate is
also decorated with abstract patterns. Stained glass in chancel
is late C19 and C20. The altar rails are C17 fine splat
balusters and winged lions' heads to either side of the central
opening; they are stained green and were originally grained.
In the chancel are 2 C17 coffin stools. The pulpit is C18 with
raised and fielded panels in oak. The pews, other fittings and
font date from 1905. A prayer desk at the west end is also of
C17 splat balusters and near it is an iron bound chest. On the
eastern pier of the north aisle is a graffito of 2 hands with
dots on the fingers. Monuments: fragments of 2 C15 inscribed
recumbent slabs at the west end of the nave. Built into the sill
of the south east window is a C13 stepped base cross slab. In
the chancel are brass plates inscribed to members of the Monson
family: William Monson, d.1638, Anthony Monson, d.1648, the
latter with a brass plate showing an achievement of arms, the
matrix of this brass is formed from a Medieval altar stone having
5 consecration crosses. Also a stone to Francis Monson, d.l664.