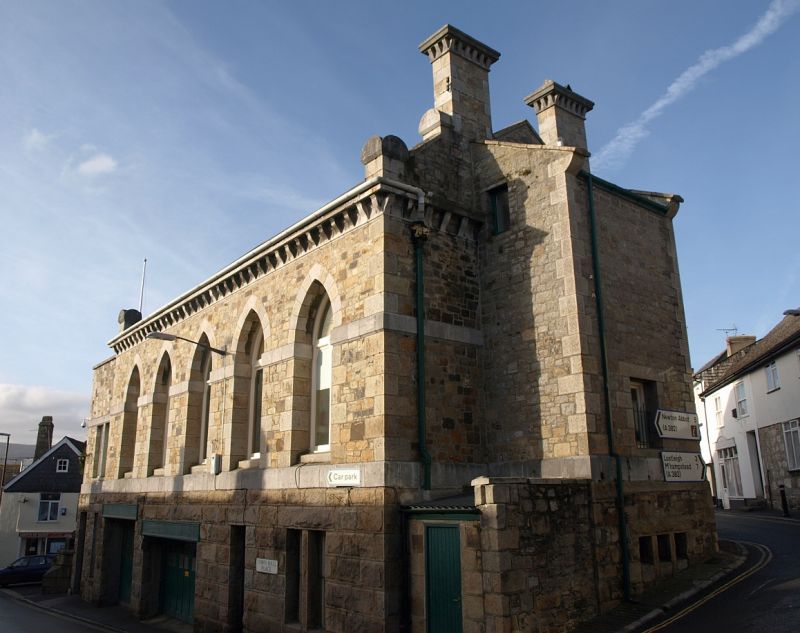 Town hall. Built 1866, with later additions. Squared granite and slatestone rubble
with granite and limestone ashlar dressings; additions on north-west side contain
some yellow brick and artificial stone. Hipped roof with asbestos slates. At
north-east end is a stone gable-parapet with a pair of symmetrically-placed
chimneystacks having bracketed Italianate tops. Rectangular plan, with smaller
square projection at south-west end and stair turret (probably a later addition) at
north-east end. A range of later buildings on north-west side. 2 storeys, with
single-storey addition on north-west. The main part of the building somewhat
resembles an Italian late medieval town hall with Renaissance detail added. The
upper storey forms a piano nobile with 5 pointed-arched windows on each of the long
sides. The basement storey is of rusticated granite ashlar, finished with a band of
limestone. From it rise the tall second-storey windows, their arches of alternating
granite and limestone blocks springing from a raised impost band of limestone; the
windows are of 2 lights with a single glazed panel above, the heads of the mullions
decorated with a 4-leaved flower. The fronts are finished with a bracketed cornice,
decorated, at each corner of the building, with a low pedestal having a shaped top.
At each of the north-east and south-west ends is a pair of iron rainwater pipes with
heads cast as fiery dragons. Interior not inspected.
The building was described in C19 as Vestry and Town Hall with police cells and
constable's residence. Cost £1,300.
Sources: Morris's Directory for Devonshire, 1870, p.459. Kelly's Directory of
Devonshire, 1897, p.81. L Tregoning, Bovey Tracey, 1983, p.48