A Grade I Listed Building in Scotton, Lincolnshire 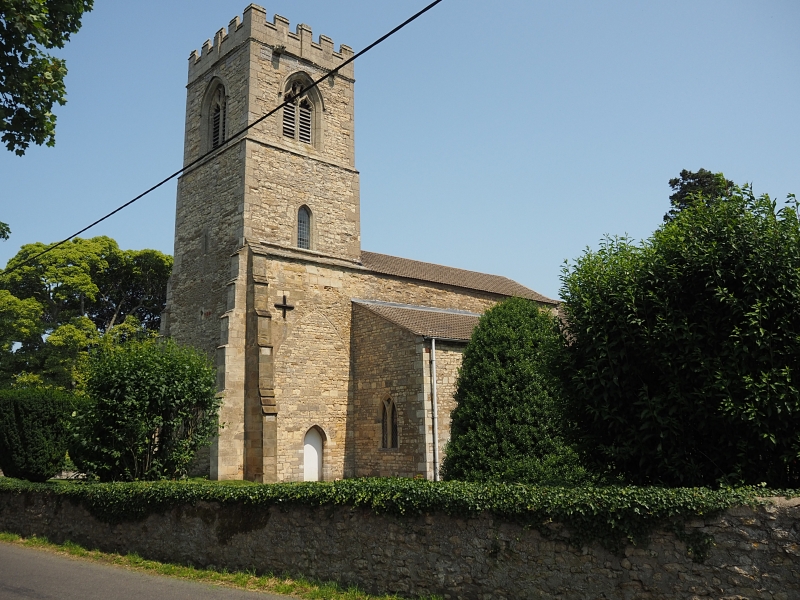 Parish church. C12, late C13,C15 C16, restoration of 1866 by G.
E.Street. Coursed limestone rubble with concrete tiled roofs.
Western tower, nave, north and south aisles, chancel. 3 stage
tower with moulded string course, battlemented parapet and
gargoyle chutes to north and south sides. The corner stepped
buttresses are added. On the south side is a large blocked
pointed arch which would have opened into the south aisle. In
the blocking is a C19 pointed doorway. In the 2nd stage is a
plain single light. The west face has a small lancet at ground
level and a small circular window above. In the 2nd stage is a
further smaller lancet. The belfry stage has to each face a C16 2
light opening with cusped trefoil heads and mouchettes under a
hoodmould. The north aisle has 3 C15 watershute heads and 4 C13
2 light windows with Y tracery, one being set in the west wall
and 3 in the north. In the east wall is a 3 light C13 window
with Y tracery. The north door is a pointed head, with an order
of roll mouding, a hobnail order and originally a hob nailed hood
mould. Beside the door are engaged angle shafts with outer nook
shafts, both with conceptual foliage on annular bases. The north
wall of the chancel has a stepped cill course and 2 two light C13
windows with Y tracery, trefoil heads and quatrefoils with beyond
to the east a single lancet. The C19 east window has 3 lights
with geometric tracery. The south wall of the chancel has a C19 2
light copy of the north chancel C13 windows, and a blocked
priest's door. High up is an oval plaque with illegible
inscription. The east wall of the south aisle has a moulded
triangular hooded window with hoodmould and label stops,
seemingly remade from fragments. In the south wall are 2 fine 3
light Y tracery windows with deep single chamfered reveals, hood
moulds and human head stops. The south doorway has a plain
single chamfered arched head with 2 displaced human head stops.
In the west wall is a repositioned 2 light window with Y tracery.
Interior; the 3, bay late C13 north and south arcade, the north
having circular columns, the south octagonal, each having simply
moulded capitals and double chamfered arches. Only the south
side now has hood moulds with carved heads to the labels. In the
west wall is a small triangular headed doorway to the tower.
Above the earlier pitch of a lower roof can be seen. In the
north aisle is a late C13 tomb recess with a 2 centred moulded
arch over. In the north aisle is a blocked squint at the east
end. The chancel arch is of 2 chamfered orders springing from
octagonal corbels. Above the arch is a 2 light C15 window with
cusped heads. The chancel has a C19 piscina and sedilia on the
south side and an aumbry on the north. In the south wall is
incorporated what appears to be a Romanesque arch. All the
fittings, including the font are from the C19 restoration.
Monuments: at the east end of the south aisle is a late C13
recumbent effigy of a cross legged knight with chain mail and
surcoat, his feet resting on a lion. Beneath him are pieces of a
C15 tomb with blank quatrefoils. Close by is the effigy of a
lady, also late C15, with flowing robes and her feet resting on a
dog. In the east end of the north aisle is a C15 priest's grave
slab, originally with black lead Lombardic inscription. The
head, shoulder and hands are shown in relief in a recessed panel
at the head of the slab.