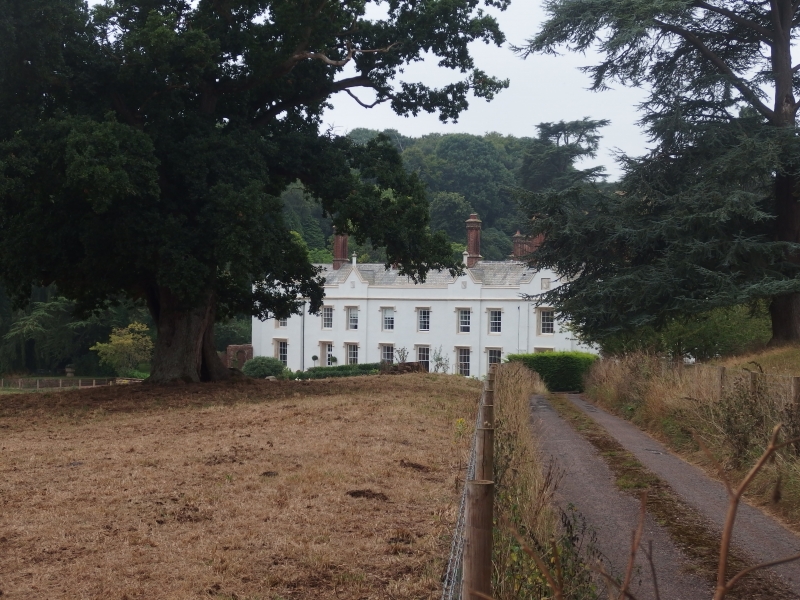 Large house, subdivided into 4 properties. Early C19 remodelling and extension of an
earlier house. Whitewashed stucco over local red brecchia; slate roofs; early C19
brick chimneys with tall grouped shafts with ornamental cornices.
There is not enough evidence of pre C19 house to establish the early plan. The
present plan is a U plan with a double depth north range under a 2 span roof (main
entrance on the north side) and east and west wings at right angles, all in an early
C19. Tudor style with parapets, gabled and hoodmoulds to the windows. The north and
east ranges contain the principal rooms; the north range with the principal stair and
a ballroom, the east range including a former library. The C19 service rooms appear
to have been at the north end of the west wing.
2 storeys. The symmetrical 8-bay east elevation, visible from the road, is the most
complete, with a moulded cornice below the parapet which rises as 4 gabled bays,
slightly broken forward, with tall pinnacles and armorial bearings in the gables.
12-pane sash windows in moulded architraves with hoodmoulds, the second bay from the
left has a C20 door inserted. The north elevation is asymmetrical with a projecting
gabled bay with a pinnacle to the left and a gabled bay to the right. Single storey
projecting porch with an embattled parapet rising as a gable in the centre. Tudor
arched moulded outer doorway, plank and cover strip inner door. Single-storey block
adjoining porch has been converted to use as a garage. Sash windows, first floor
left a canted bay. The south elevation, with a moulded cornice and parapet has a
large 8-light transomed stone window lighting the ballroom - the window is probably
late C19. The south ends of the wings are gabled with pinnacles and each has a
single-storey embattled bay with a tripartite sash with a hoodmould below a first
floor 12-pane sash with a hoodmould. An unrendered 2-bay block adjoining the west
wing at the left end has a C19 arched stone doorway and a first floor 2-light
transomed oriel window which is probably late C19. The west wing has a gap in the
west side following damage by fire. A chamfered arched doorway probably dates from
the C17 and remnants of walling west of the wing indicate former buildings. Some
late C20 plastic windows have been inserted on the west elevation.
Interior Not fully inspected. The south roof span of the north range contains 2
circa C17 roof trusses at the west end, and others may survive. The east wing
retains remnants of the early C19 library, some co-eval joinery. It is not clear
whether panelling with egg and dart moulding and the plaster cornices are original.
First floor Tudor chimneypiece said to survive but not seen at time of survey (1986).
The north range, including the ballroom and principal stair, not inspected but likely
to contain features of interior.
A circa early C19 print and watercolour in the possession of the owners shows tall
windows lighting the ballroom before the present transomed window was inserted; and
stone balustrades in front of the east elevation.