A Grade I Listed Building in Snarford, Lincolnshire 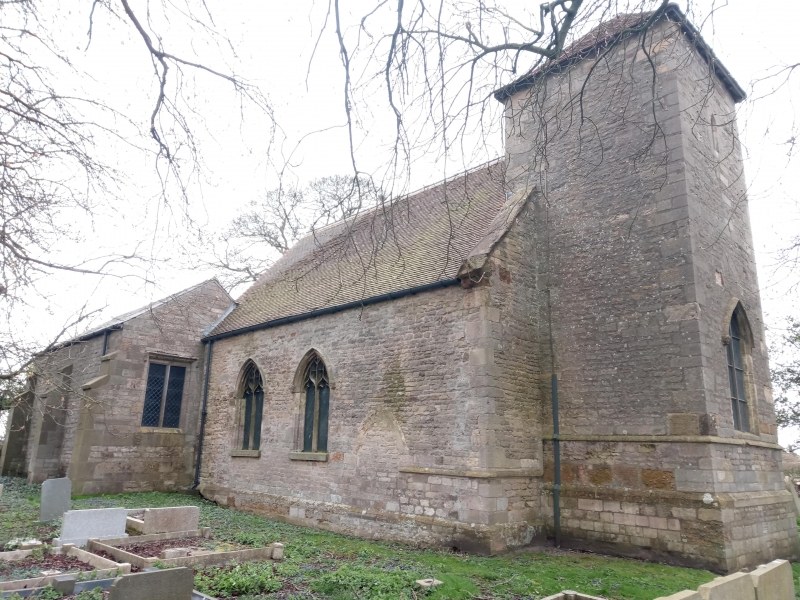 Parish church. C12, C14, C15, C16 and C19 restoration. Coursed
limestone rubble with plain tiled and slate roofs. Western
tower, nave, chancel, north chapel. The C12 tower has one stage
with plinth, string sill course and hipped slate roof. The C15
west window surround has a hood mould and one label stop, with
C20 glazing. Above is a C14 ogee headed light. In the north wall
of the nave is a blocked C14 pointed doorway with hacked back
hood mould. Further west are 2 C15 2 light windows with ogee
headed lights and panel tracery, hood moulds and human head label
stops. In the west wall of the north chapel is a C16 double
chamfered 2 light window with mullion and hood mould. The chapel
east window is c.1800 with C20 timber glazing and leaded lights
having a flat arch with keystone. The C19 chancel west window
has 2 lights with panel tracery. The chancel south wall has 2
C15 2 light windows with C19 recut tracery. The nave south wall
has 2 further similar windows with ogee headed lights. The C15
south door has 2 rolled orders, separated by a quirk and a 4
centred arched head with hood mould and human head label stop.
Interior. The C14 tower arch has octagonal responds and
capitals and a double chamfered arch. Under the tower are 4
round headed blank arches to each side, to full height, thatto
the nave having billet moulding. The C15 chancel arch has 2
chamfers, without capitals but having octagonal bases. The C19
nave roof is scissor braced. All fittings C19 except font which
is C15 and octagonal with spurred base and in the upper panels
heads, shields and foliage. Monuments. In the tower a C15
ledger slab with black lettered inscription reused as a floor
stone. In the chancel and north chapel is an important
collection of monuments to the St.Pol family. In the chancel,
behind the altar, is a fine freestanding tomb chest with canopy
of Sir Thomas St. Pol d.1588, and his wife. The sides of the
tomb chest have acanthus pilasters, the panels between contain
wreathed shields. The full length recumbent albaster effigies
show the man in full plate armour holding sword and prayerbook,
head on helm, feet on a cushion with flowers. His wife is in a
long dress with cloak and close fitting hat, holding a bible.
The inscription runs round the top edge of the chest. The canopy
is supported on 6 pillars, those at the angles being circular and
bulbous, the others in the form of obelisks decorated with
fishscale paterae, with elaborate Ionic capitals with roses in
the necking. The entablature has an egg and dart frieze. Above
the heads of the columns are 5 female and 1 male weepers. At the
centre of the canopy is a raised altar bearing shields and
surmounted by the kneeling figure of the heir clad in armour. In
front kneels a larger figure of a girl. The monument is all
painted and gilded. On the north wall of the chapel is a
further elaborate tomb to Sir George St.Pol d.1613 and his wife.
A base supporting the reclining figures of the deceased with
composite pillars supporting an entablature and armorial
termination. In the base is a central semi-circular niche
containing a carving of the deceased's daughter, flanked by
niches containing mourning putti. Above on the lower step is a
figure of Frances in full mourning dress with formal ruff and
hat, reclining on a cushion holding a prayer book. On the upper
step he reclines in plate armour with a sword. The figures are
contained in a semi-circular headed recess with roses in the
archivolt and on the back wall is an inscribed rectangular panel
with scrolls and memento mori. The pillars to either side
support a frieze and entablature from which rise flaming urns and
at the angles, and at the centre is a raised achievement of arms
flanked by scrolled shields and obelisks. In the north wall of
the chapel is an alabaster wall plaque to Robert Lord Rich, Earl
of Warwick, d.1619, depicting head and shoulder portrait
sculpture of deceased full face, with a profile of his wife
behind, set in a circular medallion. To either side are
pelleted pilasters supporting an entablature with scrolled
cartouche of arms and flanked by heraldic supporters. The whole
is painted and gilded and beneath is a panel containing an
inscribed poem. On the east wall of the chapel and in the south
wall of the chancel are 2 inscribed brass wall plaques, the
latter dated 1597 and contained in a stone surround. Also a
black marble ledge slab with armorial panel to George Doughty
d.1743.