A Grade I Listed Building in Linwood, Market Rasen, Lincolnshire 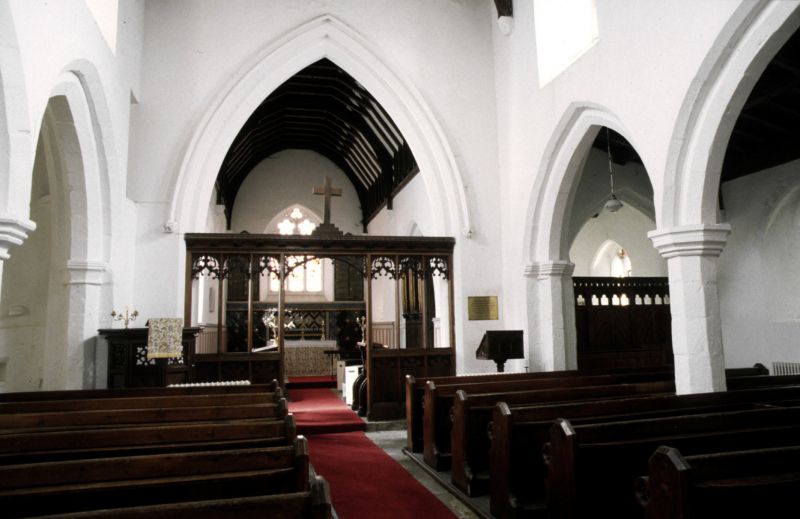 Parish church. Late C12, C13, C14, C15, restoration of 1854 and
1868. Coursed and squared ironstone rubble with ashlar
dressings. Slate and lead roofs with stone coped gables.
Western tower, nave, chancel, aisles, south chapel, south porch.
The tall 3 stage C14 tower has roll moulded plinth, angle
buttresses, single string course, moulded parapet with gargoyles
to the angles. 2 light western window has cusped ogee heads,
wave moulded reveal with hood mould and C19 human head labels.
In the belfry stage are paired C15 lights with cusped heads and
panel tracery to each face. The tower has a recessed octagonal
limestone spire with trefoil headed lucarnes and projecting heads
in the 4 principal directions. The C19 north aisle west window
is of 3 lights with segmental head, in the north wall is a double
chamfered doorway recut in the C19 and a further C19 3 light
window. At the north east angle of the aisle are 2 corner
buttresses terminating in C14 floriated canopies. The east aisle
window is C14 and has 3 lights with round cusped heads and a
segmental arched head. The C19 chancel has paired lights in the
north wall with quatrefoils over. A 3 light window is in the
east wall. The south wall of the chancel has a 2 light C19
window. The south chapel, with leaded roof, has a 2 light C19
east window, and 3 further similar windows on the south side of
chapel and aisle. The nave clerestorey consists of 3 pairs of
C13 lights beneath segmental arches with cusped ogee heads and
panel tracery, on both north and south sides. In the west wall
of the aisle is a small late C12 round headed window with hollow
chamfer. The C19 gabled porch has pointed and moulded outer
arch. The C14 inner doorway is single chamfered with simple
chamfered imposts and hood mould. Interior. The early C14 3 bay
arcades have double chamfered arches on octagonal piers on
moulded capitals. The C14 tower arch has double wave mouldings
dying into the reveals without capitals. The keeled and double
chamfered arch is C19. From south aisle is a late C13 arch to
south chapel supported on octagonal corbels, that on south side
having an earlier annular capital beneath it. In the north nave
wall is a doorway at high level to the rood loft and also in the
nave 8 C14 corbels support the C19 roof and are decorated with
human heads. In the north aisle east wall is a statue bracket
and aumbry. In the chancel south wall is a double chamfered arch
with octagonal responds opening into the former south chapel now
vestry, and the presumably reset remains of a late C13 double
piscina with engaged shafts and human masks on the bowls,
surmounted by C19 trefoil over. Fittings. The reredos is a fine
C19 tiled composition and above are 2 tin commandment boards.
All fittings are C19, the chancel screen was erected in 1911, but
the font is a recut of the original late C13 font and includes
the original base. It comprises an octagonal bowl with traceried
panels on a square pedestal with engaged columns at the angles,
on a stepped base. In the aisle and chancel windows is late
C19 stained glass. At the west end of the south aisle is a
battered C17 chest. Monuments. At the west end of the north
aisle are 2 fine early C15 brasses. On the north is a merchant,
John Lyndewode, d.1421, with his feet resting on a woolsack on
which is his woolmark. On the south is a merchant and his wife,
John and Alice Lynwode, d.1419, with beneath a panel containing 7
figures under cusped arcades. Below this is the inscription
recording the deceased. All 3 have elaborately cusped ogee
canopies. Between the 2 brasses is an abraded slab with a
Lombardic inscription and probably the matrix for a now vanished
brass. In the chancel is a restrained brass plate to Rev.
Humphrey Henchman, B.A., d.1785.