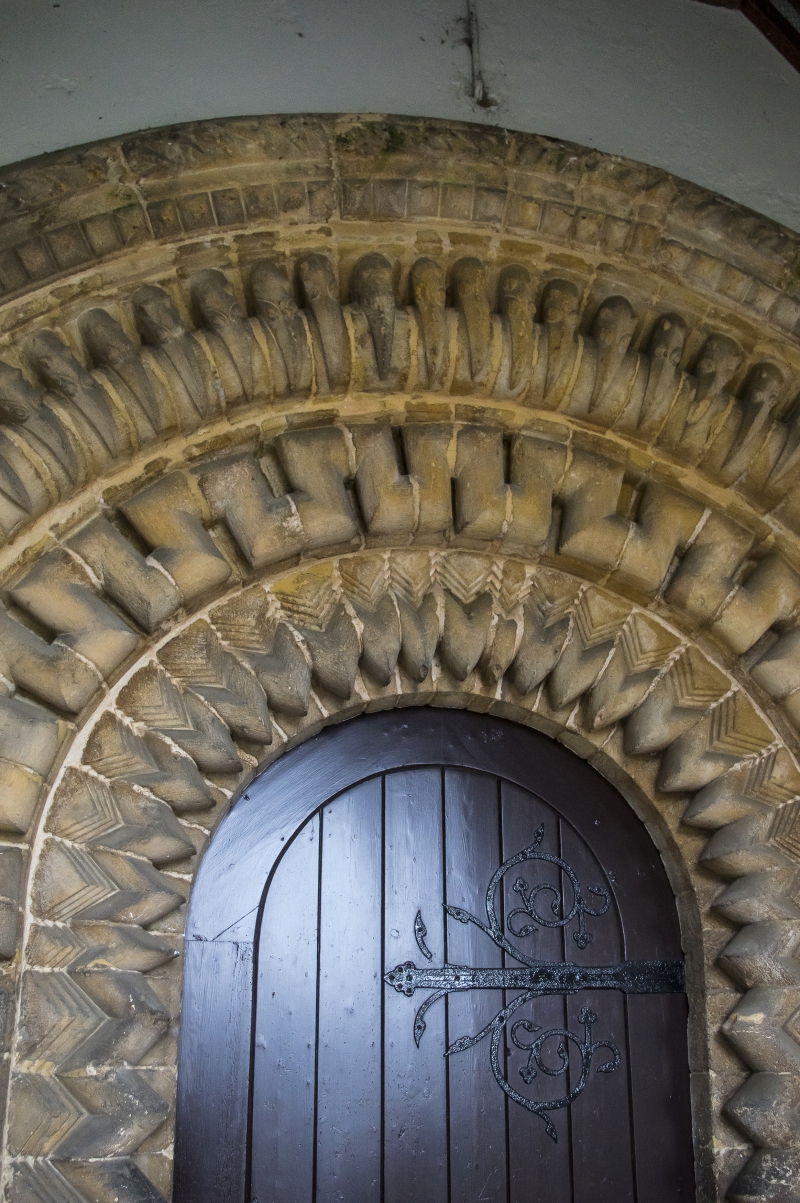 Parish church. C12, C13, C14, C15, 1861 restoration by Bellamy
and Hardy. Squared ironstone rubble with ashlar dressings,
concrete tiled roofs hidden behind parapets. Western tower,
nave, north aisle, chancel, north chapel, south porch. C15 3
stage tower with moulded plinth, stepped-angle buttresses, 2
chamfered string courses and embattled parapet with crocketted
angle pinnacles. West door with 4 centred arched head, sunk wave
moulded surround of concave moulded hood. To first stage in west
and south walls are small lights with presumably repositioned C12
round heads in limestone. Belfry stage has paired cusped ogee
headed lights with panel tracery to the heads, set in 4 centred
arched surrounds, with hood moulds. West wall of north aisle,
rebuilt externally in 1861, has a reset early C14 geometric
window of 3 lights with central cinquefoil. The north aisle wall
has 2 C19 doorways and 4 paired lights with quatrefoils. The
east wall of the aisle has a C19 window matching that of the west
wall. In the chancel, the north window is C14, of 3 lights, with
reticulated tracery which is unusually in ironstone. The C15
chancel east window is of 5 lights with ogee heads having panel
tracery to the head under a 4 centred arch. The south walls of
nave and chancel are undifferentiated beneath an embattled
parapet with angle pinnacles. There is a C14 pointed headed
priests' door to the left of which is a small trefoil headed
light, the upper parts of which retain medieval stained glass.
The stone from which the head is cut is a reused C13 grave slab
with incised cross base. There are 3 C15 4 light windows,
trefoil heads to the lights, panel tracery and triangular heads,
and beyond the porch is a similar 3 light window. C19 gabled
south porch with pinnacles has outer pointed doorway with moulded
head. The fine mid C12 south doorway has 3 deeply cut decorative
orders consisting of dogtooth with chevrons, castellations and
beakheads, the hood has billet moulding with debased cable
moulding around the periphery. Since the arch does not fit the
narrow engaged cylindrical responds it is uncertain as to what
its original position was, the lower parts and some of the
voussoirs are C19. Interior. A small single chamfered doorway
leads to the tower. The 3 bay c.1200 north nave arcade has
circular piers and responds, octagonal capitals, but keeled
mouldings round the arch heads. The chancel arch is basically of
C13 in its present form with keeled responds and double chamfered
head. The scalloped capitals are of the mid C12 and to either
side of the responds are curious scalloped motifs surrounded by
circular pellets which are also C12. At the end of the north
aisle is a double chamfered C13 arch into the north chapel. In
the north wall of the chancel a double chamfered pointed arch
with concave outer order opens into the north chapel. Further
east is a C19 shouldered doorway. On the south side is a
triangular rear arch to the small window noted externally. All
fittings are C19 apart from the screen and font. The oak screen
has unrestored C15 sections with panel tracery, and the circular
early C12 font bowl has blank arcading. In the chancel is a C19
octagonal font with quatrefoils removed from the demolished
Church of St. Pauls. By the chancel screen is a handsome cut
down C15 carved bench end. Monuments. In the chancel is an
early C14 priest's gravestone with crocketted canopy and
pinnacles. The priest is shown holding a chalice with finely
carved vestments, this stone is also from the Church of St.
Pauls. In the chancel north wall is a marble plaque in the form
of an obelisk dated 1747, with pediment and rococco cartouche.