A Grade I Listed Building in Grays, Thurrock 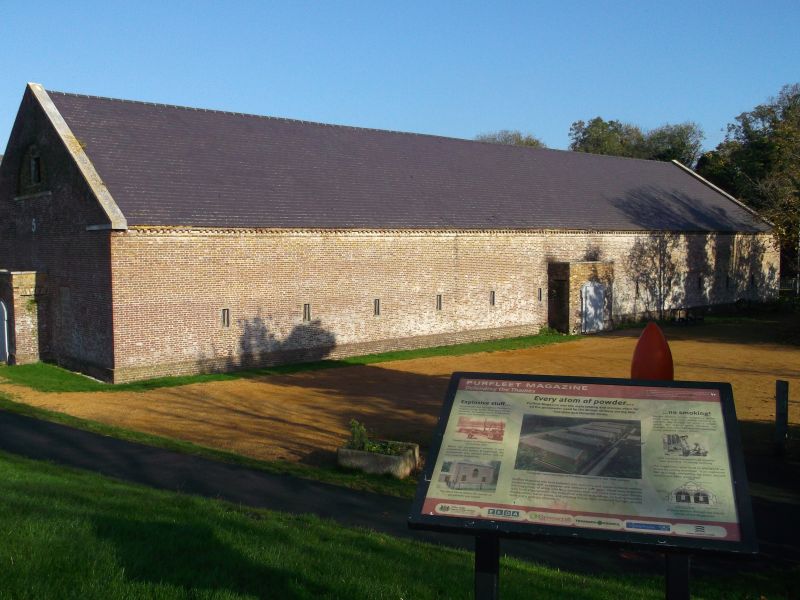 
Magazine. 1763-5, to designs by James Gabriel Montresor. Flemish bond brown brick with Portland stone dressings and stone-capped gables to shallow-pitched slate roof. Rectangular plan. Stone parapet copings are returned to gable ends to form open pediments, which frame semi-circular lunettes; the latter were louvred, but have since been blocked in brickwork. Long elevations have dentilled eaves and ventilation slits, to the centre of each being a small flat-roofed porch, with blocked windows to returns and outer doors set in recast segmental-arched eared architraves. Similar porches to each gable end gflanked by single lights with flat gauged brick arches. INTERIOR: two long barrel-vaulted aisles, the thick dividing wall having nine arched openings to facilitate movement inside. Softwood timber partitions, which have been partially reconstructed, divided each aisle into 48 storage compartments. Each took approx. 200 barrels, had a number painted on the tie beam above (these mostly surviving), and comprised studs tenoned into floor plates and upper beams; studding survives under the beams marked Nos 7 and 8/9 and 10, and 15 and 16 to 25/26. Some of copper sheathing to timber inner doors survive, these, their lining in wood and the use of timber pegging and softwood boarding to the inner walls being part of a series of measures taken to prevent accidental explosion or damage to powder. Boarded floor, originally ventilated underneath (brick ducts visible at base of east porch). Timber travelling cranes, two in each aisle and originally manually powered from their gantries, intended to run longitudinally along grooves routed out of the horizontal beams into which partitions are tenoned and along upper guide rails, braced by diagonal struts (detailed record and drawings in NMR). 17 king post trusses, of unusually heavy construction.

HISTORY: The only survivor of a group of 5 magazines (each for 10,000 barrels) by Montresor built 1763-5 (the other 4 demolished 1973). This still remains, with the 1770s magazine at Priddy's Hard opposite Portsmouth dockyard, the most outstanding example of a typically British type of magazine, with twin barrel vaults, that relates to a critical period in Britain's growth as a naval power in the decades after the Seven Years War. The wooden overhead cranes are uniquely early examples of a type of structure that had a great impact on the development of industrial buildings, anticipating their introduction into factory and warehouse spaces in the nineteenth century. Their survival in such a complete building, one built for the British military-industrial complex, is thus of great significance in the context of the Industrial Revolution. There is evidence for similar cranes at Priddy's Hard and at Morice Yard, Devonport, of the 1740s.

Purfleet became the Ordnance Board's centre of gunpowder storage as a result of an Act of Parliament passed in 1760, surpassing in size both the Tower of London and Upnor Castle on the Medway. It stored powder, transported after 1787 from the Royal Gunpowder Factory at Waltham Abbey, and supplied both the Army and the Navy, and comprised a group of five magazines (each with a capacity of 5000 barrels) built in 1763-5 by James Gabriel Montresor of the Royal Engineers for the Board of Ordnance. The depot also included barracks for officers and men, a proof house for the testing of powder and a clock tower over the entrance archway to the compound, attached to the boundary wall. These were the most substantial magazines in existence, although all but No. 5 were demolished soon after 1973.