A Grade II Listed Building in Braceby and Sapperton, Lincolnshire 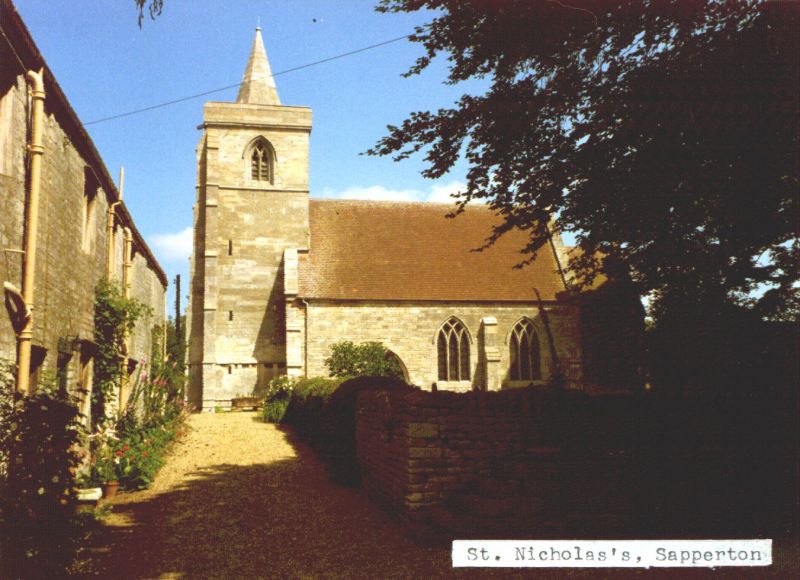 Parish Church: C12, C13, C14, C15 with 1897 alterations. Coursed limestone
rubble and ashlar, plain concrete tiled roof. Western tower, nave, chancel.
C13 ashlar tower in 2 1/2 stages having plinth, 2 string courses and plain parapet.
West side has 2 light C14 ogee headed window and north side has small ogee
headed window. The 4 belfry openings, one to each face, are C13, 2 lights
with trefoil heads. There is a very small recessed spire, restored in 1897.
The earlier pitch of the clerestorey which was removed late in the C19 can
be seen. The north aisle has also been removed but in the 1897 restoration
the nave was extended to expose the arcade internally. Resetin the new
coursed limestone rubble north wall is a C15 3-light window under a 4 centre
arch and two C13 2-light windows with geomtric tracery, both heavily recut.
The chancel has been shortened, the east window and south lancet are 1897.
The south wall of the nave is in coursed limestone rubble with ashlar bands
and has 2 C13 3-light intersecting traceried windows. The south doorway is
early C13 with dogtooth decoration to the arch. Interior: the north arcade
of 3 bays has late C12 octofoil piers one with flat waterleaf capitals and 2
double chamferedround arches and one pointed arch. The tower arch is C13,
the chancel arch C19. In the chancel is a piscina. The pews and pulpit
are from 1897, the altar rails C18. The font is a C12 round tub on octagonal
base. Over the chancel arch is a late C19 rood borrowed from the adjacent
redundant church of Haceby. Monuments: in the chancel are 2 tablets with
segmental pediments and fluted pilasters to William Lodge d.1736 and Susanna
Lodge d.1737. At the west end of the nave are 2 classical monuments with
corinthian columns, open pediment, console brackets, shields and scrolls, that
on the N.W. side is in white and grey marble to John Saunders d.1685, on the
S.W. side in white marble to Ursula Saunders d.1683. In the N.W. side of the
nave is C14 effigy set in the floor, of a lady with her head under an ogee arch.